Perhaps the final frontier for Zen 3 is AMD's eventual Threadripper lineup of high end desktop (HEDT) chips. It just depends on which come out first, next-gen Threadripper chips, or refreshed Zen 3 processors in the mainstream segment with stacked 3D v-cache. While we are waiting to find out, a couple of Threadripper Pro chips have been spotted in the Milky Way.
As in, the MilkyWay@home distributed computing project. These types of projects tap into the computing resources of anyone who opts to participate, usually only taking advantage of idle CPU or GPU cycles. It is a strength in numbers kind of thing. You may have heard of Folding@home, which is a DC project aimed at running simulations of proteins, with the ultimate goal of better understanding and treating or curing diseases like Alzheimer's and, more recently, Covid-19.
MilkyWay@home sets its sights on the galaxy by analyzing starts in the Galactic Halo. Part of the research entails searching for dark matter by mapping structures of stars orbiting the Milky Way. You can read more about the project on MilkyWay@home's website.
As to how AMD's next-generation Threadripper CPUs factor into all this, a pair of unreleased models intended for workstations have shown up on the site. One of them is the Ryzen Threadripper Pro 5995WX. Have a look... 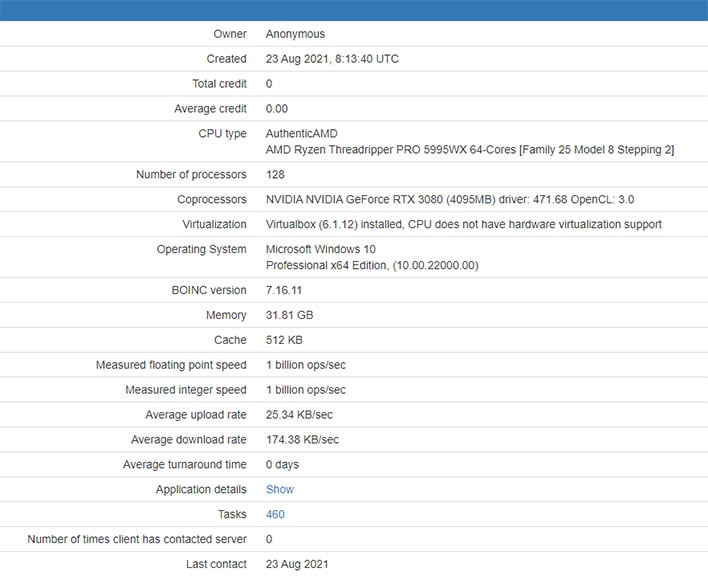 We don't get any details about clock speeds, the cache arrangement, or other finer grain specifications. However, it is identified as having 64 cores and 128 threads, as has been previously rumors. It will comprise the Zen 3 lineup of Threadripper CPUs, codenamed Chagall, and past rumors also peg it as supporting eight channels of DDR4-3200 memory and 128 lanes of PCI Express 4.0 traffic.
The other entry showcases a Ryzen Threadripper Pro 5945WX. Here it is... 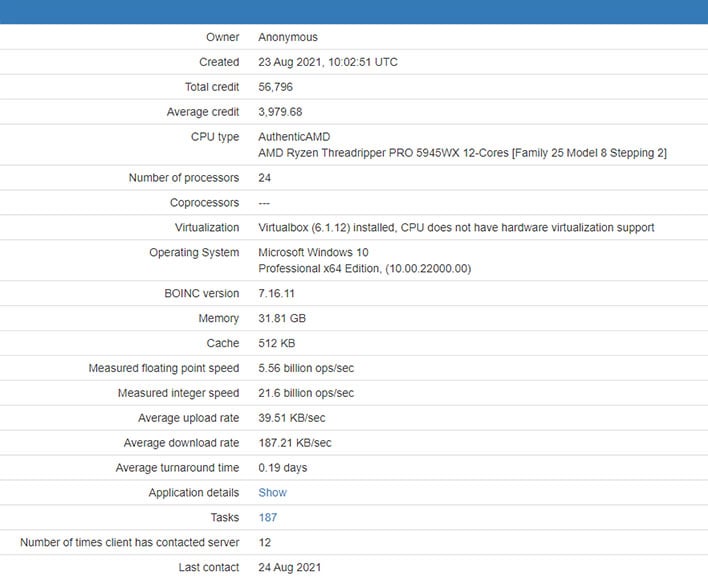 This is a tamer variant with 12 core and 24 threads (less than the 'mainstream' Ryzen 9 5950X with 16 cores and 32 threads), and like before, things like clock speeds, cache, the TDP, and other specs are not revealed. But being another workstation model, we can expect it will feature the same 128 lanes of PCIe 4.0 traffic and eight-channel DDR4 memory support (up to 2TB).
Going by past leaks, the 5945WX will feature a 4+1 chiplet arrangement, while the flagship 5995WX will have an 8+1 chiplet design. We also have some details that were spilled out by Gigabyte, when hackers infiltrated its servers and pilfered a bunch of documents.
Assuming those documents are legitimate, AMD's Threadripper 5000 series for workstations will come in 12-core/24-thread, 16-core/32-thread, 32-core/64-thread, and 64-core/128-thread configurations, while the consumer models will come in with 24-core/48-thread, 32-core/64-thread, and 64-core/128-thread models.
Regarding the power ratings, the leaked docs point to 280W TDP. And on the I/O die, they have an 80W power rating for the consumer SKUs, while the workstation models will vary by SKU—110W for 64-core/128-thread, 85W for 32-core/64-thread, 80W for 24-core/48-thread, 75W for 16-core/32-thread, and 62W for 12-core/24-thread.
While nothing is official, look for the Threadripper Pro lineup to debut in January of next year. The non-Pro models could come out sooner, perhaps in November of 2021.