We are still waiting for AMD to unveil its next generation of Ryzen Threadripper processors for enthusiasts, which raises the question, has the company given up on the high end desktop (HEDT) segment? There is no indication that it has, so no worries there. As for when Threadripper CPUs based on Zen 3 will arrive, rumor has it we will see them in November.
You may recall that back in April, it was rumored AMD would launch its Threadripper 5000 "Chagall" CPUs in August. That could still happen, in terms of an introduction, with actual availability being slated for a couple of months later. Regardless of the exact time frame, however, it seems new Threadripper silicon is right around the bend.
What can we expect? The biggest bullet point is a shift to Zen 3. As we saw within AMD's mainstream Ryzen 5000 series lineup, Zen 3 is a stout architecture for gaming, productivity chores, content creation, and everything else. So it is pretty exciting that Zen 3 will mosey its way over to AMD's upcoming Threadripper stack. 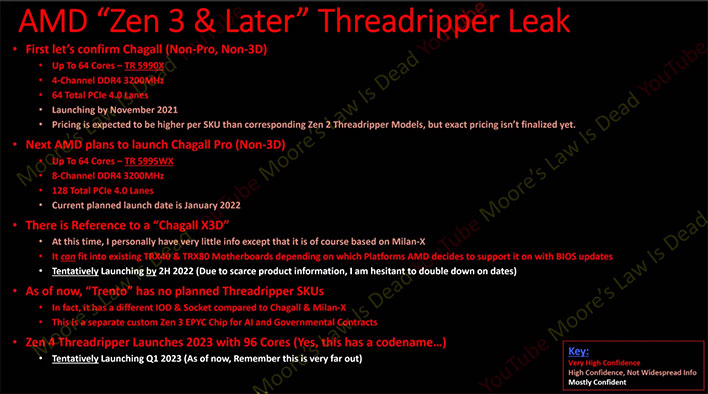 As far as the leaks and rumors scene go, one of things I appreciate about Moore's Law Is Dead is that he breaks down bullet points by confidence level. As you can see in the above slide, he has high confidence AMD will release a Ryzen Threadripper 5990X processor later this year with 64 cores and 128 threads.
This will be the highest end configuration for this round, which means AMD will once again cap its Threadripper lineup at 64 physical cores (just like the Threadripper 3990X). While some people might be disappointed with that decision, bear in mind that is a lot of heavy metal. For comparison, AMD's mainstream processors top out with the 16-core/32-thread Ryzen 9 5950X.
Chagall will feature quad-channel DDR4-3200 memory support and 64 lanes of PCI Express 4.0 traffic. Meanwhile, there will also be a Chagall Pro variant, the Threadripper 5995WX, with the same core and thread counts, but it will support eight channels of DDR4-3200 memory and 128 lanes of PCIe 4.0 traffic. That one will come early next year (January 2022, according to what the leaker is hearing).
It seems AMD is also mulling a Chagall X3D variant. This would essentially be a version of Threadripper with stacked 3D V-cache, just like AMD is planning to add to its mainstream desktop processors This would be based on Milan-X and, depending on BIOS support, will fit and work within existing TRX40 and TRX80 motherboards.
Finally, the latest Ryzen Threadripper rumors indicate that AMD's Threadripper CPUs won't be stuck at 64 cores forever. Looking further down the line, Zen 4 models will push the ceiling to a whopping 96 cores and 192 threads. That type of metal is so heavy even Iron Maiden would be impressed. We can hardly wait, though patience is required—it won't debut until sometime in 2023.