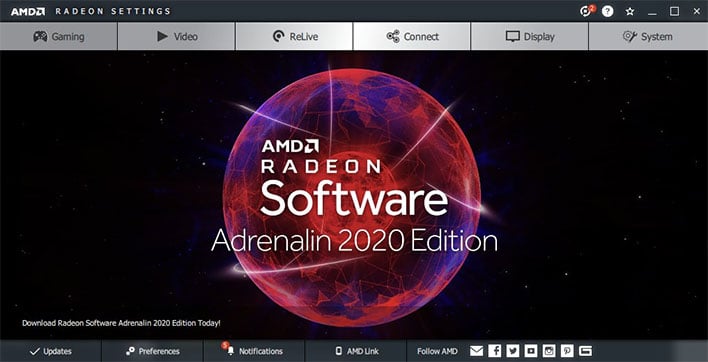 As we approach the end of the calendar year, we will also wave goodbye to the 2019 Edition of AMD's Radeon Software Adrenalin Edition, which will be updated to a 2020 release. We know this because logic dictates as much, and also because advertising banners are already showing up for the next major release of AMD's GPU driver ecosystem.

So, it is fair to say AMD is teasing its Radeon Software Adrenalin Edition 2020 release, whether on purpose or by mistake. Whatever the case, the banners were spotted by Reddit forum member PKBeam64, as well as Twitter user Blaze (@BlazeK_AMDRT).

There's not much in the way of details, though there is one interesting tidbit—a reference to a new feature called Radeon Boost. It's been speculated that this could be another piece of tech pulled from AMD's acquisition of HiAlgo in 2016, the first being Radeon Chill. 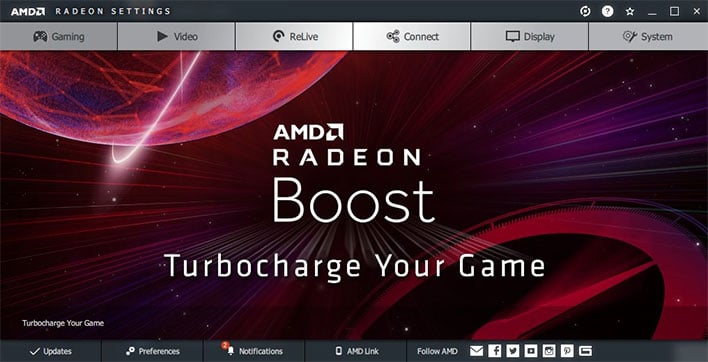 "Boost intercepts and on the fly modifies commands sent from the game to the graphics card, optimizing performance frame by frame. When you are in action and the camera moves, Boost decreases the resolution to boost the framerate. When camera stops, it restores full resolution. This provides optimal responsiveness and smoothness for the game, even with weak graphics card," HiAlgo explains on its website.
From the description, it basically sounds like a dynamic resolution technology. How well it works, however, remains to be seen (assuming that's the feature AMD is teasing with its banners).
However it ends up working, AMD has not tried very hard to keep the name of the technology a secret. In addition to the banners, Radeon Boost appears in a list of features on the side of Radeon RX 5700 XT retail boxes, as another user on Reddit shared (and it probably appears on the side of retail boxes for the non-XT variant as well).
The other question we have is, will this feature be limited to Navi-based cards, or will it apply to Vega and Polaris parts as well? If it does work with older generation graphics cards, and works well, it could extend the life of those parts. On the flip side, it could potentially stave off upgrades to Navi, so we'll see.
Images Source: Reddit (PKBeam64)