Spring is in the air and you know what that means, right? If you guessed new products from AMD, then pat yourself on the back (and thank a teacher, because you clearly read our headline). The much-anticipated Ryzen 7 5800X3D with its stacked 3D V-cache is one of those products, as are half a dozen new Ryzen CPUs and APUs. Plus, there's a chipset surprise on the horizon. Let's get into it all, shall we? 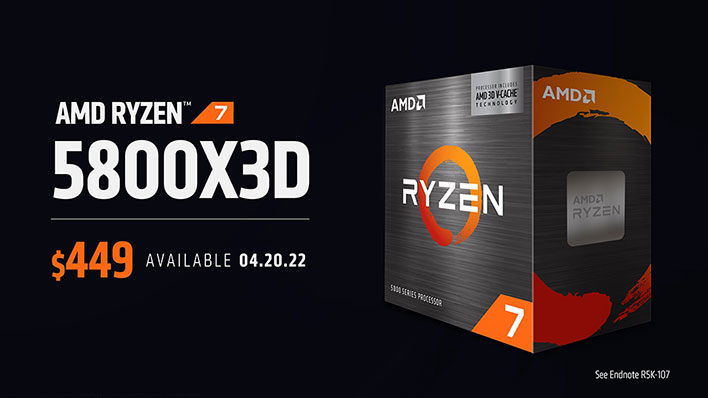 Kicking things off, AMD announced pricing and availability for the Ryzen 7 5800X3D. It's set to land on store shelves on April 20, 2022 for $449 (MSRP). That's the same price the Ryzen 7 5800X debuted at (which now sells for $100 less). It's also about $140 less than the Ryzen 7 5950X. Why make that comparison?
AMD claims straight up that the Ryzen 7 5800X3D is around 15 percent faster than the Ryzen 9 5950X in games. It's the first consumer gaming chip to feature vertically stacked cache, and that translates to a performance uplift in some applications. Obviously the 16-core/32-thread Ryzen 9 5950X is still going to win in multi-threaded workloads capable of putting all those cores and threads to work, but for gaming, the Ryzen 7 5800X3D offers a strong proposition.
To recap the specifications, you're looking at an 8-core/16-thread CPU clocked at 3.4GHz to 4.5GHz, with 96MB of total L3 cache. It's essentially a Ryzen 9 5800X with added cache bolted on, and slower base and boost clocks. There's still no official word on whether or not the Ryzen 7 5800X3D can be overclocked to make up the difference, but even if not, the added cache should more than make up for the clock speed disparity in games, if AMD's performance claims hold true.

In addition to the Ryzen 7 5800X3D, AMD is fleshing out is mainstream Ryzen 5000 series lineup with a handful of additional SKUs. By adding more mid-range chips to the fold as previously rumored, AMD is effectively countering Intel's Alder Lake launch. We've already seen retail pricing drop on the existing Zen 3 stack, and with more CPUs added to the mix, customers have a few more options to consider in the mid-range market.
Here's a look at the SKUs... 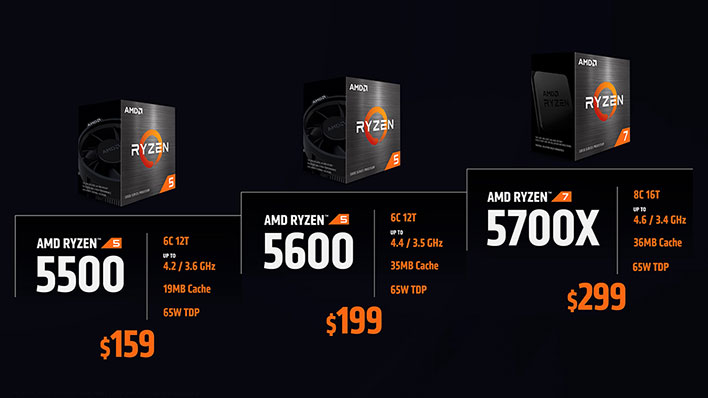 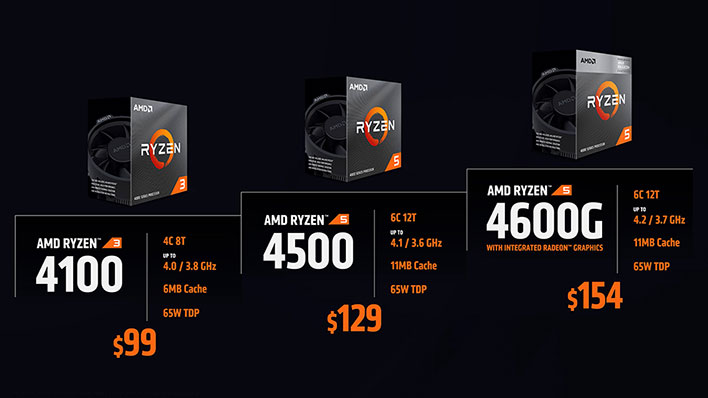 AMD is also expanding its Ryzen 4000 series with a couple of new CPU models, and an APU that DIY builders can now buy themselves (more on that in a moment). These are all based on AMD's previous generation Zen 2 architecture and carry relatively affordable price tags ranging from $99 to $154.

Starting at the top, the Ryzen 5 4600G is the sole APU of the bunch. If that SKU looks familiar, it's because AMD already released a Ryzen 5 5600G back in July 2020, but it's been exclusive to OEM system builders. Now it appears AMD is releasing it to the general public. 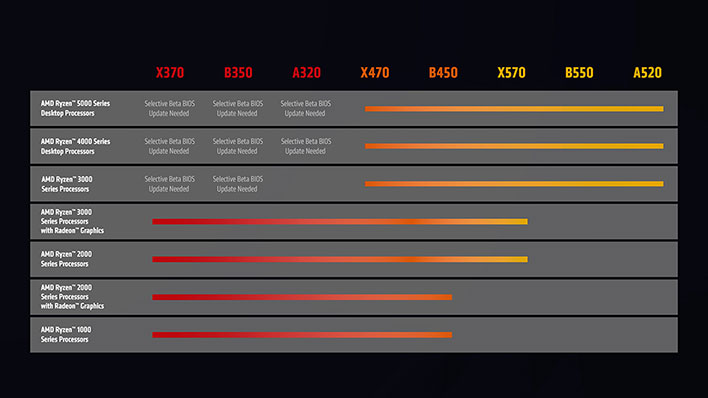 What about that chipset surprise we alluded to earlier? AMD has decided to officially support Zen 3 in its 300 series chipsets. AMD hinted at CES that this was something it was considering in light of customer feedback, and now it's happening.
"You have asked for this, we have been working on it for months, and I'm so excited to finally let you know that we are making it happen," said Robert Hallock, director of technical marketing at AMD.

AMD is enabling support for Zen 3 on 300 series chipsets in AGESA 1.2.0.7. This is the firmware blueprint that AMD provides to its hardware partners like ASUS and Gigabyte, who then add their custom tweaks and bits for their specific motherboards. So if you own a motherboard based on a 300-series chipset, be on the lookout for a BIOS update from your board manufacturer.
Hallock specifically mentioned the X370 and B350, though AMD's slide points to the A320 getting support as well. The onus shifts to board makers to make available BIOS updates for older motherboards, but they now have AMD's official blessing. It's a good move by AMD, and one that can help Ryzen CPU owners extend the life of their platform and upgrade to Zen 3 without a wholesale overhaul.
By the way, this AGESA update applies to all Zen 3 CPUs, including the newly launched Ryzen 7 5800X3D and the other new additions. Given the performance uplift AMD is claiming with the Ryzen 7 5800X3D, this is exciting news. Hallock says its board partners will begin rolling out BIOS updates in roughly April or May. Good stuff.