Listen up, Zen 3 is the real deal on the desktop, as we have seen in our review of the Ryzen 9 5950X and Ryzen 9 5900X. It pretty much performed like we expected and hoped it would—wonderfully, in other words. But the desktop is just a single destination for Zen 3. It is also headed to servers in EPYC fashion, and a benchmark leak gives us a preview of what's to come.
The data center is a lucrative business for companies like AMD and Intel, which makes its Zen 3 launch in that space an important one. As AMD noted it its most recent earnings report, increased EPYC processor sales contributed to it growing its combined enterprise, embedded, and semi-custom revenue 116 percent year-over-year and 101 percent sequentially, to $1.13 billion. And that occurred without the benefit of Zen 3.
Now that the Ryzen 5000 series has arrived on the desktop, we can expect a new round of EPYC processors to follow. Namely, AMD is preparing the launch of its third generation EPYC "Milan" CPUs based on Zen 3, and one of those chips—EPYC 7713—has made a cameo in SiSoftware's SANDRA database. Have a look... 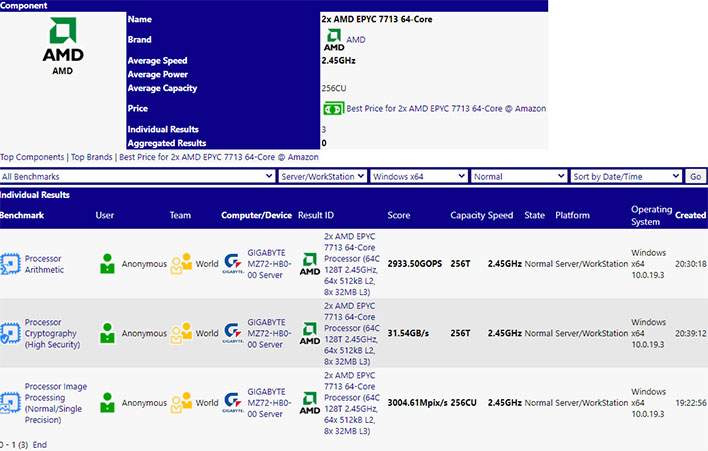 According to the listing, this particular slice of silicon (100-000000344 OPN) wields 64 cores and 128 threads and is clocked at 2.45GHz . There are actually two of them in this benchmark run, nestled into a motherboard with a pair of SP3 sockets. So we are really looking at a combined 128 cores and 256 threads of computing muscle for server workloads.
Each CPU has 256MB of L3 cache (8x 32MB) and 32MB of L2 cache (64x 512KB). This is undoubtedly an engineering sample, and with regards to the clockspeed (which is not clear if it is a base or boost frequency), final specifications could change.
As for what these results tell us, well, have a look at this... 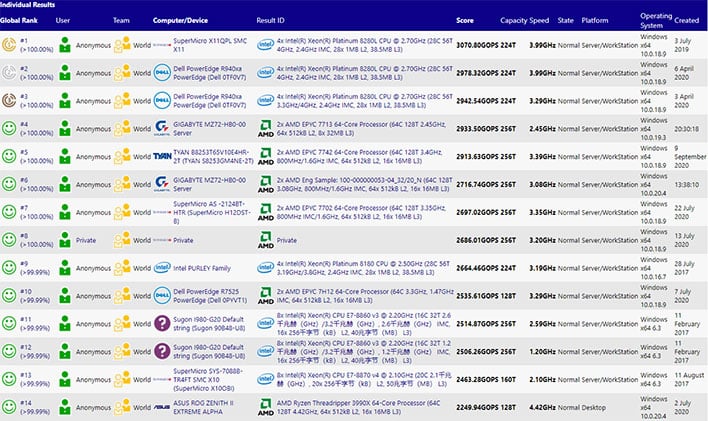 Sorting SANDRA's processor arithmetic test by individual results, the EPYC 7713 clocked at a modest 2.45GHz jumps up to fourth place, only coming in behind benchmark runs obtained with four Intel Xeon Platinum 8280L processors. Very impressive.
Even more impressive is that in some instances, it actually beats systems equipped with twice as many or more Xeon CPUs, including four Xeon Platinum 8180 chips and eight Xeon E7-8860 CPUs. Of course, the combined core and thread counts on those Xeon setups is less than the combined core and thread count on the dual EPYC 7713 setup. But then we starting getting into things like performance per watt and overall cost, both of which look like they will favor Milan.
We'll have to wait and see, but in the early going, things are looking really well for Milan.