Someone get in touch with Michael Buffer and have him belt out his catchphrase, "Let's get ready to rumble!," because AMD and Intel are about to duke it out in the flagship mobile processor space. Intel is sitting pretty with its Tiger Lake-H processors, while the first laptops sporting AMD's Ryzen 9 5980HX are right around the corner. As we wait for the main event, some leaked benchmarks offer up a preliminary bout.
The Ryzen 9 5980HX is the burliest APU in AMD's mobile lineup. It's based on the company's latest generation Zen 3 architecture (7-nanometer manufacturing, codenamed Cezanne) and features an 8-core/16-thread design with a 3.3GHz base clock, 4.8GHz max boost clock, and 16MB of L3 cache, with a configurable TDP range of 35W to 54W.
It also boasts eight Radeon graphics cores based on Vega, with up to a 2.1GHz clock speed. Be that as it may, this is a chip that deserves to be paired with discrete graphics, at least where gaming and 3D applications are concerned.
The Ryzen 9 5980HX is very much a performance part in the mobile space, and it made an appearance in Geekbench, as part of an ASUS ROG Zephyrus Duo 15 SE laptop configuration that has not yet been released. A similar model with the same processor has been spotted in an Amazon Canada listing, though, but it's not yet in stock.
So, about that benchmark leak... 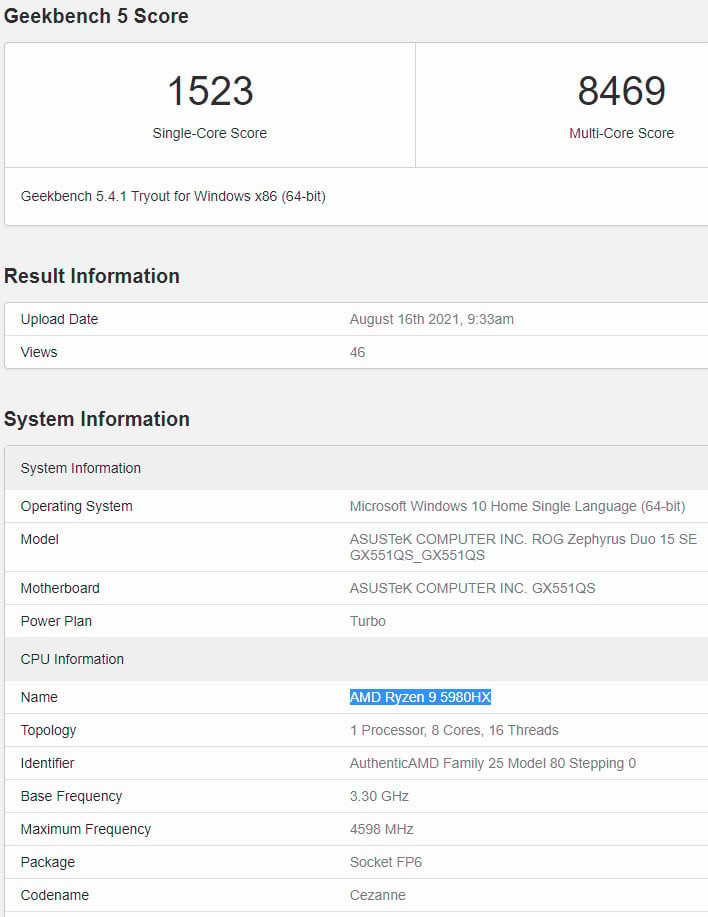 The Ryzen 9 5980HX cameo at Geekbench shows it was running at the correct clock speeds, with a Turbo power plan in place and 32GB of DDR4-3200 memory. While not listed in the above chart, a separate benchmark entry for presumably the same system indicates it was paired with an NVIDIA GeForce RTX 3080 mobile GPU with 16GB of GDDR6 memory.

We are mostly interested in the CPU scores, since we already have a good idea of how NVIDIA's mobile Ampere lineup stacks up. As such, AMD's flagship APU scored 1,523 in the single-core test, and 8,469 in the multi-core test.
How do those scores compare? Both are a little bit behind the numbers we obtained in a preview laptop configured with Intel's flagship Core i9-11980HK processor, which is an 8-core/16-thread chip with a 2.6GHz base clock, 5GHz max turbo clock (on one or two cores), and 24MB of L3 cache.
On that system, we recorded a single-core score of 1,642 and multi-core score of 9,119. So as it applies to this benchmark leak, the Ryzen 9 5980HX gets beat by Intel's finest by around 7.5-7.8 percent.
Bear in mind that this is a single benchmark entry, from an unreleased system. We'll need to get our hands on a laptop with a Ryzen 9 5980HX to see for ourselves how it truly compares, not just in Geekbench, but a variety of benchmarks and workloads. Laptop cooling plays an important role too, which makes direct comparisons between two different mobile processors a little tricky.
That said, Tiger Lake-H has the early edge in the flagship space. We'll see if it can maintain it once we spend some time with AMD's top mobile SKU.