AMD has been attacking the CPU market on all fronts, and that even includes Chromebooks. Or more specifically, premium Chromebooks with its newly unveiled Ryzen 5000 C-series processors based on Zen 3. That's the same potent architecture that powers AMD's latest generation desktop, laptop, and server processors, built on the same 7-nanometer manufacturing node.
There are four new SKUs, each equipped with Radeon RX Vega graphics. Sitting at the top of the heap is the Ryzen 7 5825C, the first 8-core/16-thread x86 processor Chromebooks. It sports a 2GHz base clock and up to a 4.5GHz boost clock, it has 20MB of cache (16MB L3 + 4MB L2), and it is configured with a default 15W TDP. And for graphics, it rocks eight GPU cores clocked at up to 1.8GHz.
Here's an overview of the full lineup... 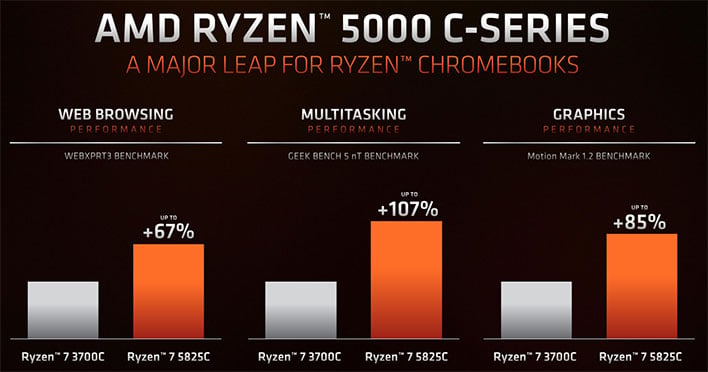 This is not actually AMD's first processor lineup for Chromebooks. There's also the previous generation Ryzen and Athlon 3000 C-series for mainstream Chromebooks and the 3015Ce for entry-level Chromebooks. The Ryzen 5000 C-series, however, is intended for premium Chromebooks, and models that fall a little higher within the mainstream segment.
Compared against its own previous generation lineup, AMD is touting massive performance gains of up to 67 percent for web browser, 85 percent in graphics, and 107 percent for multitasking. 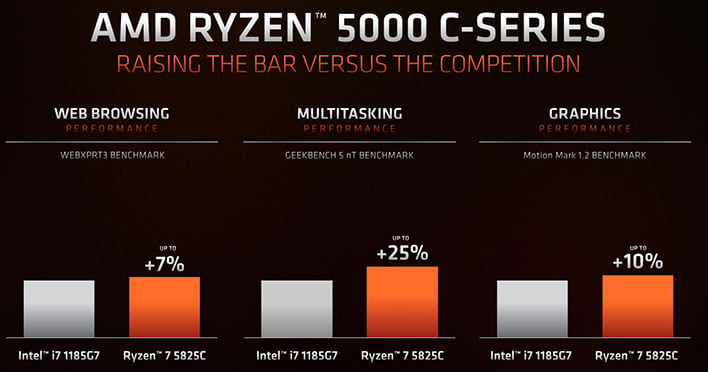 Compared to the competition, the performance advantage is not quite as robust, though still significant according to AMD's own benchmarks. AMD compared the Ryzen 7 5825C to the Intel's Core i7-1185G7 (Tiger Lake), claiming its top Zen 3 chip for Chromebooks is up to 7 percent faster for browsing the web, 10 percent faster in graphics, and 25 percent for multi-tasking chores. We'll have to wait and see how performance comparison shakes out with Alder Lake.
Battery life is other point of emphasis, with AMD touting all-day runtime in Chrome OS, which will obviously vary depending on the workload. It's also claiming up to 94 percent better life than Intel when pitting the Ryzen 5 5625C against the Core i5-1135G7. That's also a Tiger Lake chip, which doesn't offer the same hybrid benefits that Alder Lake does.
Acer has already announced a Chromebook based on the new Ryzen 5000 C-series, the updated Chromebook Spin 514 that's bound for the market in Q3. Likewise, HP is prepping its Elite C645 G2 Chromebook with up to a Ryzen 7 5825C for release this quarter.