As we await the arrival of laptops and perhaps mini PCs outfitted with AMD's recently announced Ryzen 4000 series of mobile APUs, we are left to wonder what actual performance will be like, and how it will compare to Intel's offerings. This is where leaked benchmarks come into play, and incidentally, a Ryzen 3 Pro 4300U APU has seemingly made an appearance in the UserBenchmarks database.
We say "seemingly" because you just never know with these things. Assuming the listing is accurate, however, it gives us an idea of how this particular "Renoir" APU compares to Intel's lineup, at least in this single benchmark. The listing also outlines a few specifications for the Ryzen 3 Pro 4300U chip.
Credit goes to prominent leaker APISAK for spotting the database entry, and giving the world a heads up on Twitter. According to the listing, the Ryzen 3 Pro 4300U wields 4 physical cores and 8 threads, with a 2.5GHz base clock and 3.1GHz turbo frequency. The database entry indicates it is the brains of a Lenovo laptop with 8GB of RAM and a 256GB NVMe solid state drive. Interestingly, AMD's non-Pro Ryzen 3 4300U wields 4 cores and 4 threads. 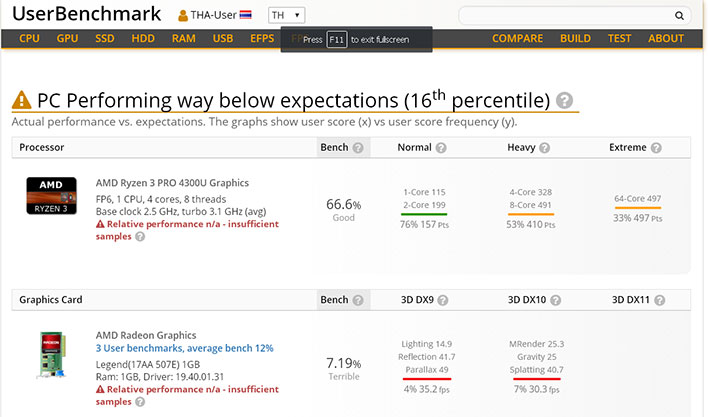 It's not clear if this is an engineering sample or finalized silicon. If it is the former, clockspeeds and the resulting performance could end up different than what is shown (usually for the better, though not necessarily). As things stand, however, this is a decent showing for the Ryzen 3 Pro 4300U and AMD's transition to 7 nanometers in mobile (finally!).
To put things into perspective, here's a comparison of the leaked Ryzen 3 Pro 4300U and Intel's Core i7-8565U, which is also a 4-core/8-thread CPU... 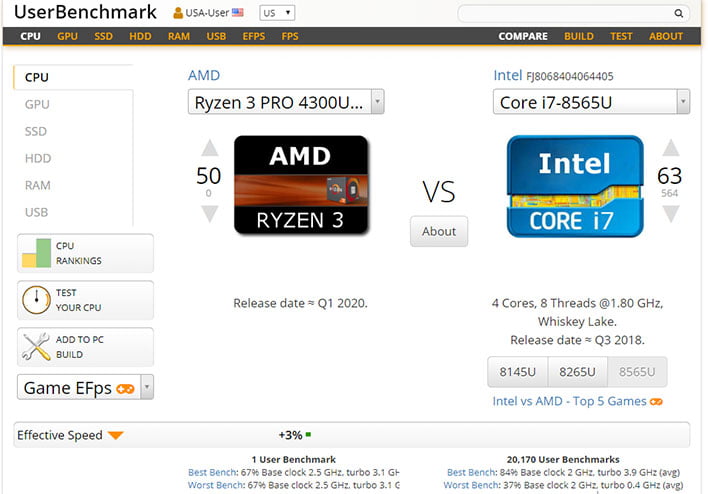