Hey, have you heard—AMD is rumored to be releasing a new round of desktop accelerated processing units (APUs) pairing its Zen 2 CPU architecture with enhanced Vega graphics. Of course you have, because there have been a million leaks on the subject. Make that a million and one, because another set "Renoir" benchmarks have hit the web.
While not yet official, it's hardly a secret that Ryzen 4000G Renoir APUs are on tap from AMD. It gets a little confusing because AMD's model numbers do not align from one product to another. For example, when AMD launches its Zen 3 desktop CPUs (sans graphics), those will also presumably bear the Ryzen 4000 label, sans a "G" at the end label.
In any event, what we have here are more 3DMark database entries uncovered by Twitter user APISAK. This time around, he dug up some performance numbers for AMD's upcoming Ryzen 3 4200G and Ryzen 5 Pro 4400G. 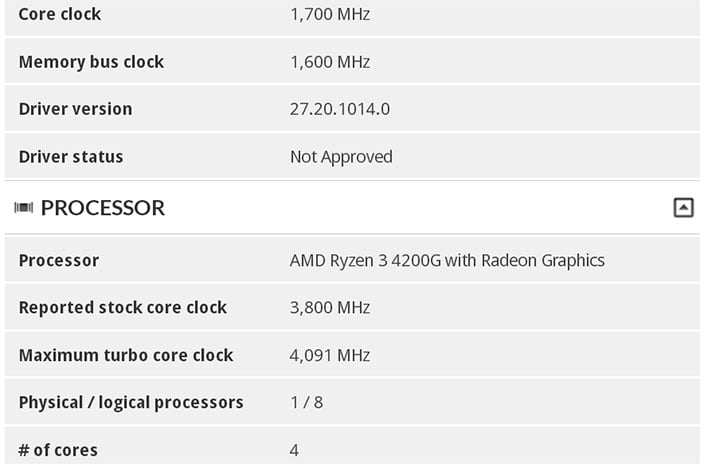 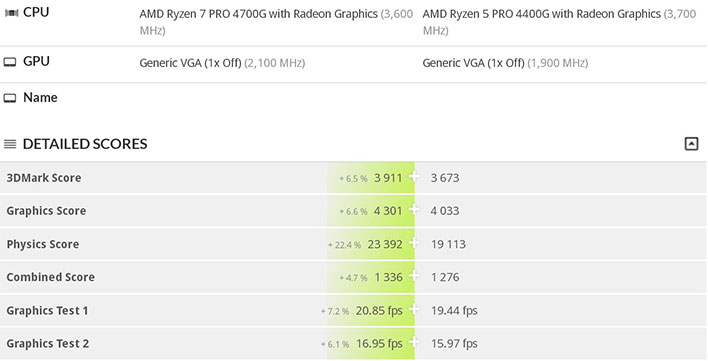 As for the Ryzen 5 Pro 4400G, it's said to be a 6-core/12-thread APU clocked at 3.7GHz to 4.3GHz, with 7 CUs running at 1,900MHz.
This one was benchmarked in 3DMark's Fire Strike test, where it posted an overall score of 3,673, a Graphics score of 4,033, a Physics score of 19,113, and a Combined score of 1,276. As seen in the comparison above, it comes in a bit under a Ryzen 7 Pro 4700G. The Graphics score is also higher than what you typically see from a Ryzen 7 4800H, which runs at a slower 1,600MHz.
There are no big surprises here. The performance metrics are about what we would expect, considering the specifications (assuming this is all accurate). At this point, it's just a waiting game for these APUs to be formally introduced.