What is probably one of the worst kept secrets on the web is the pending launch of a new round of AMD Ryzen processors with Radeon graphics for the desktop. Otherwise known as Renoir, the upcoming Ryzen 4000G series will pair up to 8 CPU cores based on AMD's latest generation Zen 2 architecture with Vega graphics. Now thanks to Biostar, we may have a fairly fleshed out lineup to digest before the new APUs are finally served.
Biostar was not supposed to spill the beans yet, but as spotted by Komachi on Twitter, the CPU support for the company's B550GTQ motherboard outlined several unreleased Ryzen 4000G/GE series parts, complete with base clocks and TDPs.
The leaked APUs are separated into three categories: G, GE, and Pro. Ones with a G designation have a 65W TPD, while the GE models have a 35W TDP. All three of the Pro models are G variants, so those have a 65W TDP as well.
Here's a look... 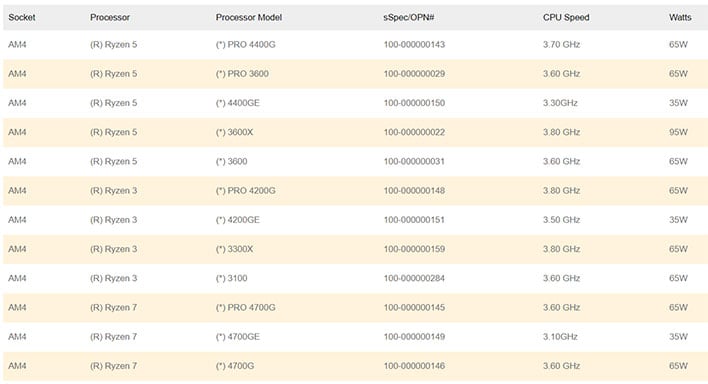 Realizing its error, Biostar has since removed the Ryzen 4000G/GE series from its CPU support list, though a trip in the Wayback Machine confirms this was a legitimate leak (versus a Photoshop).
There are seven processors in all. Combined with information from previous leaks, here is what we are looking at...
All of these are interesting simply by way of being based on Zen 2 with onboard graphics, but the Ryzen 5 4400GE and up are especially intriguing because they bring more cores and threads to the mix than either the Ryzen 3000G series based on Zen+, or the Ryzen 2000G series based on the first generation of Zen. Those are all 4-core parts, some without the benefit of simultaneous multi-threading (SMT).
Assuming Biostar's list is accurate, there could be even more Ryzen 4000G/GE series APUs on the horizon. That's because the list does not highlight non-Pro versions of of the Ryzen 5 Pro 4400G or Ryzen 3 Pro 4200G, and instead only shows lower power (and lower clocked) GE counterparts.
It's not clear when the Ryzen 4000G series will launch, though it will likely be this summer, and perhaps in June to coincide with the B550 release. Here's hoping for some attractive price points.