The global shortage of silicon is not preventing tech companies from continuing to innovate, and traveling down their respected roadmaps (ETAs just might need to be adjusted on occasion). We bring this up because a prominent leaker has already begun discussing supposed details related to AMD's eventual fourth generation Radeon DNA (or RDNA 4) architecture.
For anyone who is wondering, AMD's latest crop of graphics cards are based on its RDNA 2 architecture, and that also includes the custom graphics silicon sitting pretty inside Microsoft's Xbox Series X and Sony's PlayStation 5 consoles (some have referred to the graphics implementation inside the PS5 unofficially as RDNA 1.5, but that's a whole other topic). 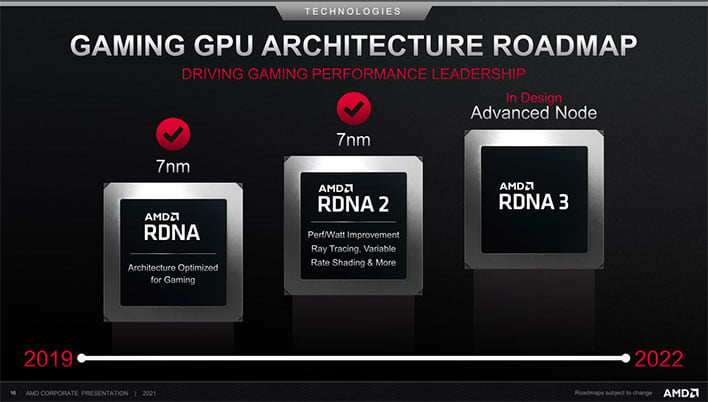 Obviously the Radeon RX 6000 series (RDNA 2) is not the end of the road from AMD's efforts in graphics. But in case there was actually any doubt, AMD has already confirmed that RDNA 3 exists, that it is based on an "advanced node," and that it is in the design phase, as outlined in the company's latest public roadmap, as shown above.

"Our engineering teams are aggressively driving our product and technology roadmaps to continue setting the pace of innovation for high-performance computing," AMD CEO Dr. Lis Su said during an earnings call last month. "We remain on track to launch next generation products in 2022, including our Zen 4 processors built with industry-leading 5-nanometer process technology and our RDNA 3 GPUs."
Beyond this point, we venture into the territory of leaks and rumors, and @greymon55 in particular has been dishing out some interesting information as of late. Earlier this week, for example, the leaker suggested AMD's next-generation Radeon RX 7000 series could actually be a mix of RDNA 3 and RDNA 2 GPUs.
It's said the Radeon RX 7900 XT would feature a Navi 31 GPU, the Radeon RX 7800 series would be based on Navi 32, and the Radeon RX 7700 lineup would be built around Navi 33, all of which are RDNA 3 silicon. Additionally, rumor has it Navi 31 and Navi 32 will use AMD's multi-chip module (MCM) design, while Navi 33 will leverage a monolithic makeup.
If the rumor is accurate, lower end cards in the Radeon RX 7000 series would be built around refreshed versions of RDNA 2 GPUs. And namely, Navi 24, 23, and 24 would all get a 6nm refresh for the next round, whereas they are currently built on a 7nm node.

Interesting stuff, and the leaker has now offered up some additional details, saying RDNA 4 is shaping up to be a "full product line with a common architecture," meaning there will not be a mix of refreshed last gen parts with the new stuff, when it comes out. They also say RDNA 4 will feature an MCM design that uses 3nm and 5nm silicon.
What this means, if the information ends up being accurate, is the entire Radeon RX 8000 series will feature RDNA 4 underneath the hood. And as for the internal makeup, the graphics compute die (GCD) will leverage a 3nm node, while the multi-cache and I/O die (MCD) will be manufactured on a 5nm node.
We'll see if things actually play out this way. Barring any delays, RDNA 4 would launch in late 2023 or sometime in 2024. It will compete with whatever NVIDIA has at the time (GeForce RTX 50 series?) and a future version of Intel's Arc GPU, either Battlemage or Celestial. Fun times ahead!