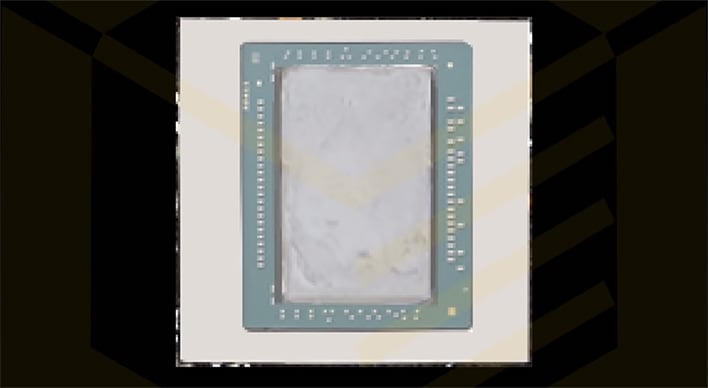 Something quite interesting popped up this weekend, that being an alleged photo of AMD's upcoming Navi 21 XT GPU, otherwise known as Big Navi. While we have no way of verifying if the photo is real or not, if we pretend that is really is representative of the final silicon, Big Navi will indeed be living up to its unofficial designation. Because it is quite big. Like, really BIG.

The image you see above is a partial reflection of the alleged die obtained by Coretek from an unnamed source. To protect his source (as leakers are prone to do), he heavily edited the photo, removing every product reference and even changing the caps around the die. Those have been replaced in the photo with Radeon RX 5700 XT caps.
That explains why there are some clear elements of a Photoshop job in the photo above. Make of that what you will. As for the actual size, Coretek explains in a YouTube video that he calculated the die to be roughly 29.5 PCI Express lanes tall by 18.5 PCI Express lanes wide. Or to use a more standard unit of measurement, he has it at around 29mm tall by 18.55mm wide, for a total die size of about 536mm2.
That would qualify as AMD's second biggest consumer GPU, behind Fiji (GCN 3.0), which powered the Fury X. He also admits that the numbers could be off because it is tricky business extrapolating that kind of information from a leaked photo. But that is what we have to work with at the moment.
For a sense of scale, here is the alleged Navi 21 picture next to a Navi 10 chip... 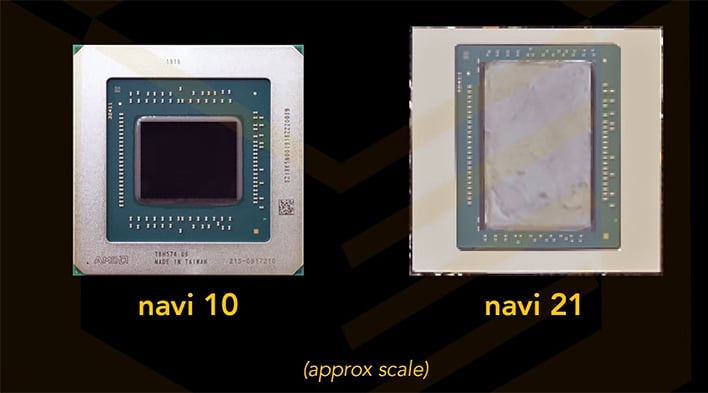 If the Navi 21 photo ends up being real, then we are looking at a massive increase in size from RDNA 1 to RDNA 2, at the top of the stack. This would further mean a whole lot more transistors. And just as RDNA 1 delivered a 50 percent increase in performance per watt over GCN, RDNA 2 could deliver a similar gain over RDNA 1. That is certainly an exciting proposition.
The big question, of course, is how will Big Navi compare to NVIDIA's GeForce RTX 30 series. That would is tougher to answer. 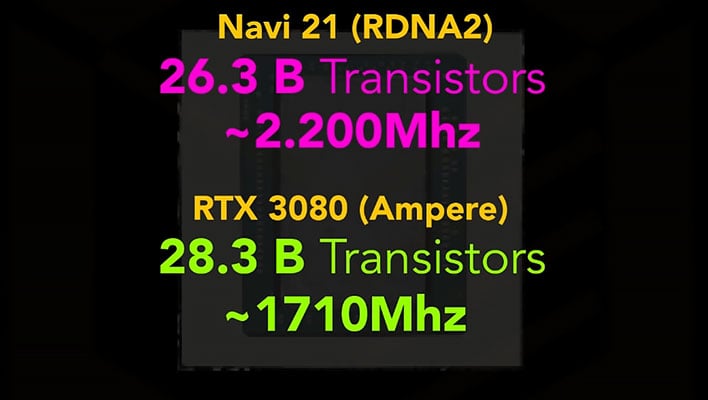 For those who want to go down that road, Coretek did some fun math calculating an estimated number of transistors packed into Navi 21, based in part on the manufacturing node (TSMC 7N+). He arrived at around 26.3 billion transistors. Rumor has it the boost clock on the Radeon RX 6900 XT will check in at around 2,200MHz, with 80 compute units and 16GB of GDDR6 memory underneath the hood.

For comparison, the GeForce RTX 3080 has 28.3 billion transistors and boosts to around 1,710MHz. We have already reviewed the GeForce RTX 3080 (as well as the GeForce RTX 3090) and it is a beast. That said, without knowing exactly how those transistors will be used in Navi 21, it is difficult to guesstimate performance.
Rumor has it we could be looking at performance that checks in around 15 percent higher than a GeForce RTX 2080 Ti, with an Anniversary Edition potentially bumping things up a little higher. But of course this is all speculation right now.
At least we are in the home stretch leading up to Big Navi's launch. Barring a last-minute change of plan, AMD will unveil its Radeon RX 6000 series on October 28. Stay tuned!