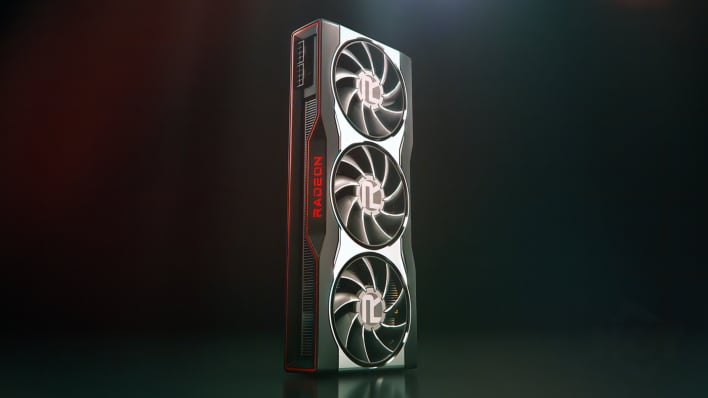 NVIDIA’s GeForce RTX 30 Series launches haven’t exactly gone off without a hitch. The $699 GeForce RTX 3080 launched last week, and retail sites were quickly overrun (from both legitimate gamers and bots) with inventory selling out within minutes. The launch of the GeForce RTX 3090 yesterday wasn’t much better. However, it looks as though AMD doesn’t plan to have the same shortage when it launches its Radeon RX 6000 family of graphics cards late this fall.

This confirmation comes Frank Azor, AMD’s Chief Architect of Gaming Solutions and Marketing. He made the comment in a tweet yesterday regarding the GeForce RTX 3090 launch. Twitter user Andre Elijah was commenting about how he was unable to score a GeForce RTX 3090 yesterday due to limited inventory, and used colorful language to describe how his work would be hampered without the card in-hand. 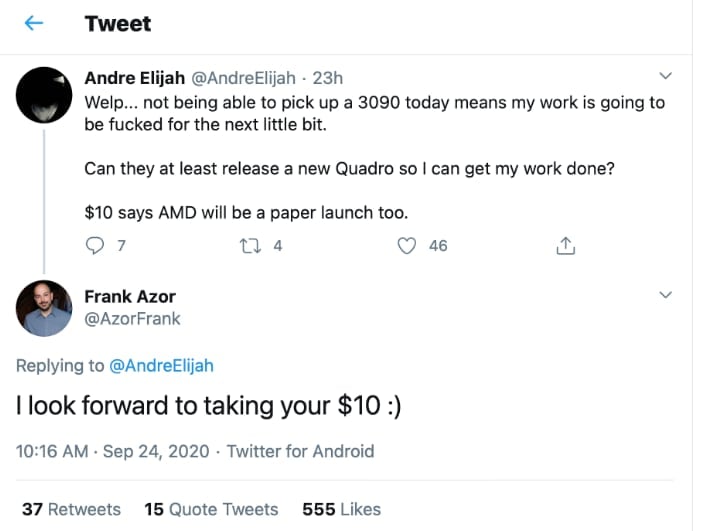 Andre then attempted to throw a bit of shade at AMD, saying that he bet $10 that the company would be in a similar situation when it launches its Radeon RX 6000 cards. Frank Azor responded back with a simple quip: “I look forward to taking your $10 :)”

We should note that NVIDIA is using Samsung for its 8nm Ampere GPUs used in its GeForce RTX 30 Series graphics cards, and yields might not actually all that great at this early stage in the game. AMD, on the other hand, is using its long-time partner to handle its Radeon RX 6000 Series. AMD has been using TSMC’s 7nm lines for its GPU and CPU products ranging from Radeon VII to Zen 2 to Radeon Navi. Yields at 7nm have been incredibly good, and it’s likely that AMD is relying on an enhanced 7nm process node for Radeon RX 6000.

Could this be why Azor is so confident in AMD’s ability to deliver sufficient inventory when Radeon RX 6000 launches? It’s quite possible, but we’ll have to wait until the October 28th Radeon RX 6000 announcement and the subsequent launch date to see if Azor is ultimately right.

And then the day before the GeForce RTX 3090 even launch, NVIDIA apologized again, writing, "Since we built GeForce RTX 3090 for a unique group of users, like the TITAN RTX before it, we want to apologize upfront that this will be in limited supply on launch day. We know this is frustrating, and we’re working with our partners to increase the supply in the weeks to come.”