We are just 10 days away from AMD's Radeon RX 6000 "Big Navi" reveal. As a result, the gaming community is waiting with bated breath to get a look at the next-generation flagship graphics card family and what kind of performance it will bring to the table.

When AMD announced its Ryzen 5000 series of Zen 3 enthusiast processors earlier this month, it gave us just a little taste of what to expect with regards to performance. At 4K resolutions, the unnamed Radeon RX 6000 card that Dr. Lisa Su discussed easily outpaced the NVIDIA GeForce RTX 2080 Ti and was within striking distance of the $699 GeForce RTX 3080.

But AMD appears to have something potentially groundbreaking up its sleeve to not only challenge the GeForce RTX 3080, but possibly even the mighty GeForce RTX 3090. Patrick Schur, who has been fairly reliable with past leaks, is suggesting that the Navi 21 XT (a la Radeon RX 6900 XT) will feature a staggering game clock of 2.4GHz.

To put that in perspective, the Radeon RX 5700 XT (RDNA) has a base clock of 1.6GHz, game clock of 1.75GHz and a boost frequency of 1.9GHz. At 2.4GHz, that is the highest clock speed that we've seen for any consumer graphics cards stock from the factory. And considering that just the game clock is mentioned, we could be looking at even higher speeds for the maximum boost clock with this new RDNA 2 architecture. The Xbox Series X, which shares its RDNA 2 architecture, has a fixed GPU clock of 1.825GHz. 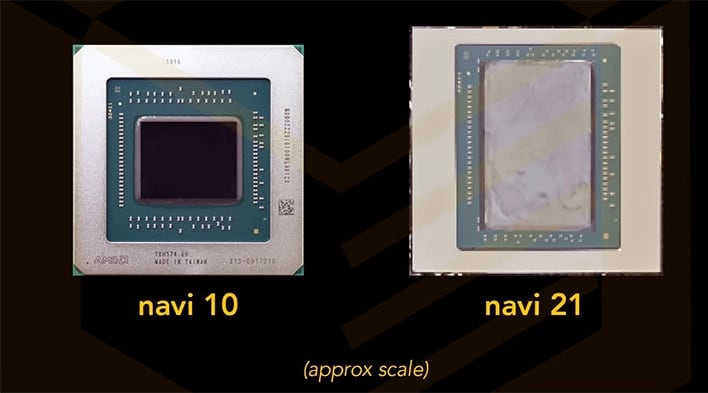 We'll just have to sit back and hold tight until October 28th to truly see what AMD has in store, but based on all of the leaks that we've seen so far, AMD is shaping up to make some waves with its Radeon RX 6000 family.