How often have your heard that patience is a virtue? Forget that noise—when it comes to GPU launches (and technology in general), the leak and rumor scene thrives because there is so much interest in what is right around the corner. In this case, AMD is just a few weeks away from unveiling its Radeon RX 6000 series, which might tote a feature called Infinity Cache.

What exactly is Infinity Cache? That is a good question, and also where that whole virtuous patience comes into play. If in fact the Radeon RX 6000 will lean on such a feature, AMD will undoubtedly discuss it when launching its next-gen graphics cards, based on its second generation Radeon DNA (RDNA 2) GPU architecture.
For now, there is not much in the way of clues, just a trademark filing for the term Infinity Cache. Have a look... 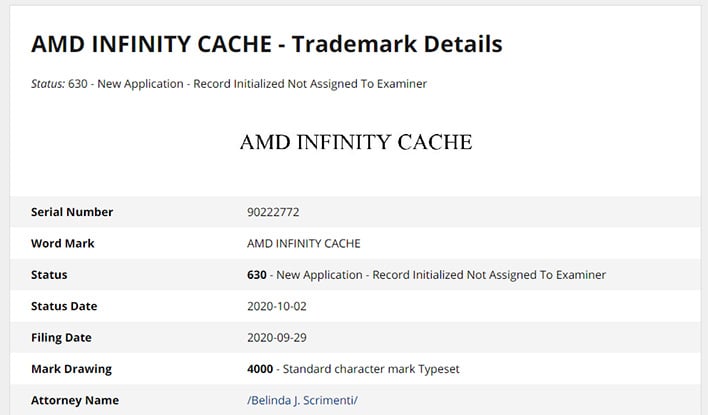 According to the listing on Justia Trademarks, the application was filed by Advanced Micro Devices, Inc. on October 2, 2020. It does not reveal any juicy details, though the folks at Videocardz claim to have "independently confirmed that Big Navi will sport a special cache connected to the memory subsystem." Interestingly, the site further claims that AMD's internal name for this cache is not called Infinity Cache.
Depending on how old the site's information is, one possibility is the special cache it is apparently privy to will indeed be called Infinity Cache, given how recent the trademark application was filed. AMD could have decided at the last minute to give it a fancy title.
Whatever the case might be, we are likely looking at a way for AMD to increase memory bandwidth. As a point of comparison, the GeForce RTX 3090 boasts 384-bit memory bus and a max memory bandwidth of 936.2GB/s. The GeForce RTX 3080 has a 320-bit bus and maxes out at 760.3GB/s, while the upcoming GeForce RTX 3070 has a 256-bit bus and can hit 448GB/s.
If looking at AMD's current generation (and soon-to-be last generation) lineup, the Radeon RX 5700 XT has a 256-bit memory bus and a max 448GB/s memory bandwidth. Rumor has it the Radeon RX 6000 series could also top out at a 256-bit memory bus.
Who knows if that is actually true, but if so, a special cache—Infinity Fabric—could potentially alleviate a performance bottleneck related to that. It is really just a guess game, though. AMD might just be making up a marketing term for an existing technology, or as outlined in a patent filed last year, Infinity Fabric could be something bigger. That patent, by the way, details "adaptive cache reconfiguration via clustering," in case you are in the mood for some technical writing.
In any event, there are numerous possibilities here. We will find out which one it is on October 28, when AMD announces its next-gen graphics cards.