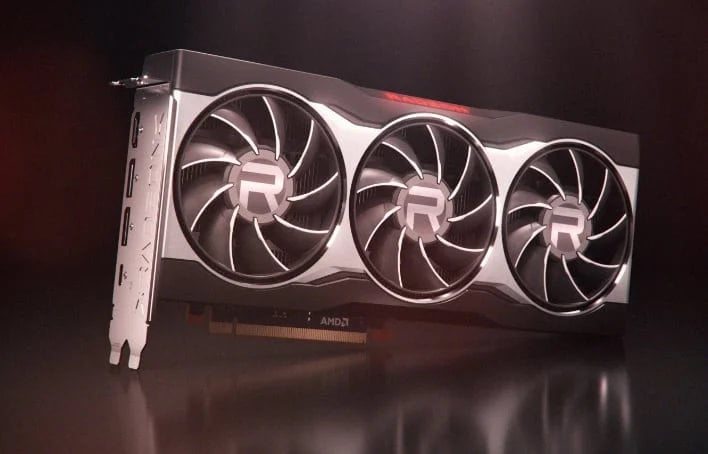 The Graphics Wars of 2020 continue to heat up. We already know most of the players on the field from both AMD and NVIDIA, but not all of the various models have been released into the wild yet. AMD talked a really big game when it announced the Big Navi family of Radeon RX 6000 graphics cards, which included the RX 6800, 6800 XT, and 6900 XT. AMD's own number seemed to show some really spectacular performance at attractive prices, but we thirst for third-party verification. The latest benchmark leak comes from Basemark, and it shows some great performance for the bottom end of the pack.

First of all, let's talk numbers. The test system appears in Basemark's database as a Ryzen 9 3900XT with an MSI X570 Godlike motherboard and 16 GB of memory. Basemark includes three different scores for three APIs: Vulkan, DirectX 12, and OpenGL 4.5. Not many games these days use OpenGL so we're ignoring that for now. In those tests, the purported Radeon RX 6800 scored 13,846 for Vulkan and 14,635 for DX12. Those numbers seem big on their own, but how does this AMD card compare to NVIDIA's latest cards? 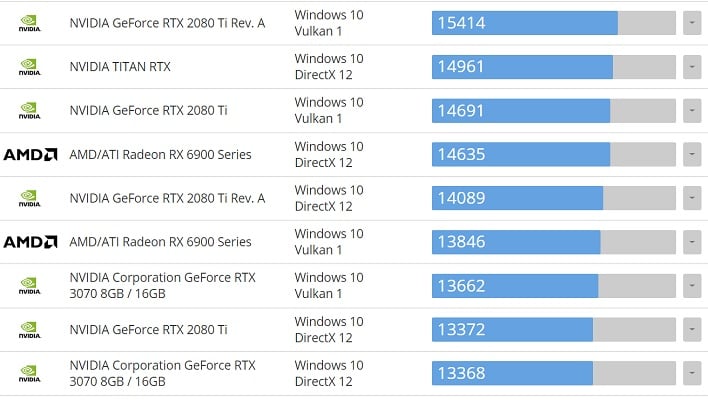 Basemark's database makes it easy to search and compare graphics cards. When we line up the leading graphics cards all in a row, we can see that a pair of AMD cards appear to best the GeForce RTX 3070. The Radeon on this chart outscores the GeForce RTX 3070 by a full 10% in DirectX 12, while simultaneously edging out the current-cheapest Ampere graphics card in the Vulkan test. What's weird here is that they say they are Radeon RX 6900 Series graphics cards. However, if we dig into the result, we can see that the driver identifies the card as a Radeon RX 6800.

So, what gives? AMD's drivers always lump at least a few models based on the same GPU into the same PCI Device ID. AMD is PC Vendor 1002, and we can see in the PCI database that the Radeon RX 6800, 6800 XT, and 6900 XT all have the same PCI Device ID of 73BF. Because all three cards are based on the same Navi 21 GPU, all three of them get to share their PCI Device ID. That could make identifying results a little difficult in Basemark's database down the road when there are more results, but it just takes a little reading. 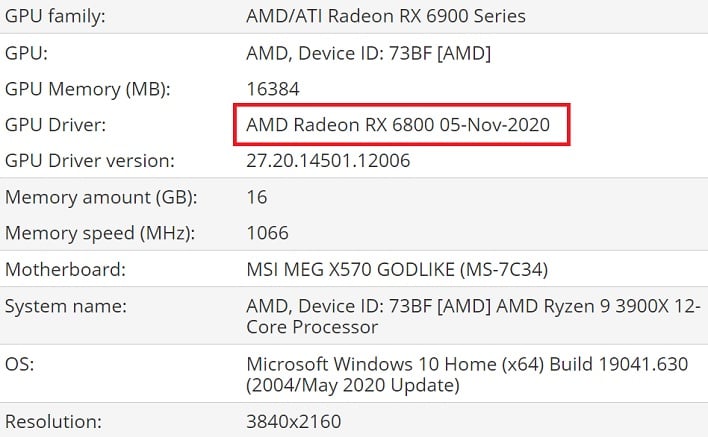 This isn't the first leak we've seen that compares the Radeon RX 6800 favorably to the GeForce RTX 3070. Earlier this week, we saw some impressive OpenCL compute results from Geekbench. We've also seen some impressive gaming performance in Tomb Raider and 3DMark. It seems all that's left is for these cards to hit the wild. That's coming soon: both the Radeon RX 6800 and 6800 XT are due to release on November 18th according to AMD's original live stream announcement. Wednesday can't get here soon enough.