This week might have included the launch of the GeForce RTX 3070, but the talk of the internet has been AMD's big unveiling of its RDNA 2 graphics architecture and the Radeon RX 6000 series of graphics cards, aka Big Navi. The Red Team claims to have undercut NVIDIA's Ampere cards at a couple of price points and meet or beat them at all performance points, which has gamers salivating for what is in store when the cards launch next month. AMD talked a big game when it compared its Radeon RX 6900 XT's 4K gaming performance to that of the GeForce RTX 3090, but those numbers (and all of AMD's numbers) still need independent verification.

While sanctioned performance review numbers won't come until closer to launch, more leaks keep hitting the internet. This time around, it's on the lower end of the price spectrum. The leakers at PJ's Lab on Twitter posted photos of a Ryzen 5 3500X (a Chinese exclusive, according to AMD) driving a Radeon RX 6800, the more mainstream $579 RDNA 2 graphics card. The tests on hand are for Shadow of the Tomb Raider and 3DMark Time Spy, and the performance is pretty sweet, if it holds up as true. 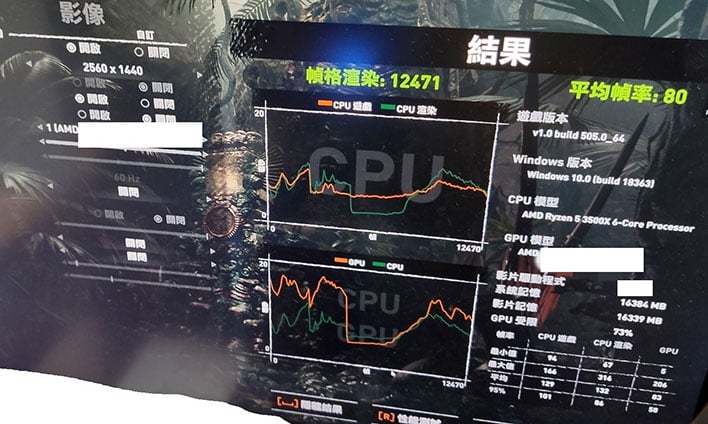 According to the leaked photos, Tomb Raider with its very highest settings averaged 46 frames per second at a resolution of 4K, and 80 fps at the more common 1440p resolution. These settings and the target resolution are high enough that it's very likely the CPU doesn't really play into the frame rate as a bottleneck, so this score sits entirely on the graphics card's shoulders. While 4K is certainly playable at that average frame rate, we think most Radeon RX 6800 buyers will be more interested in the 1440p frame rate, which appear to be glassy smooth.

Also on the leak agenda is 3DMark Time Spy, which was running on the same midrange CPU and baby Big Navi. In a separate tweet, PJ's Lab posted a blurry photo of the overall Time Spy score along with the Graphics score. Overall, the system hit 12,704—right in line with our own GeForce RTX 3070 score of 12,703. Bear in mind that our system had a very powerful Intel Core i9-10980XE, so it's likely our system had a better physics score mixed into that. 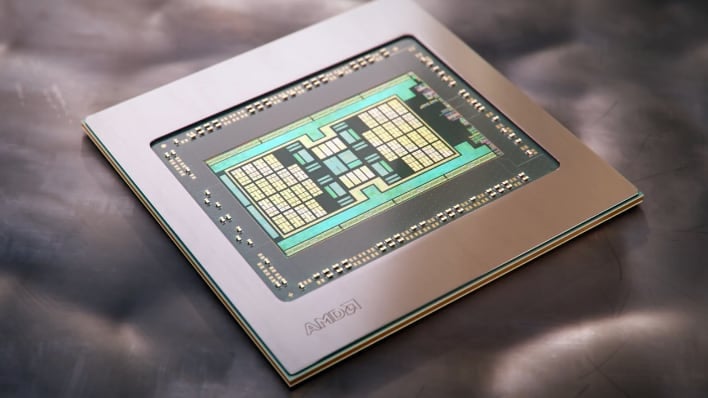 More interesting than the overall score is the 16,775 graphics score that appears in the photo. As we browsed around 3DMark's results database, we saw that most GeForce RTX 3070s have a Graphics score around 14,000 or upper 13,000s once we get outside of the top 10%, which are most likely overclocked. 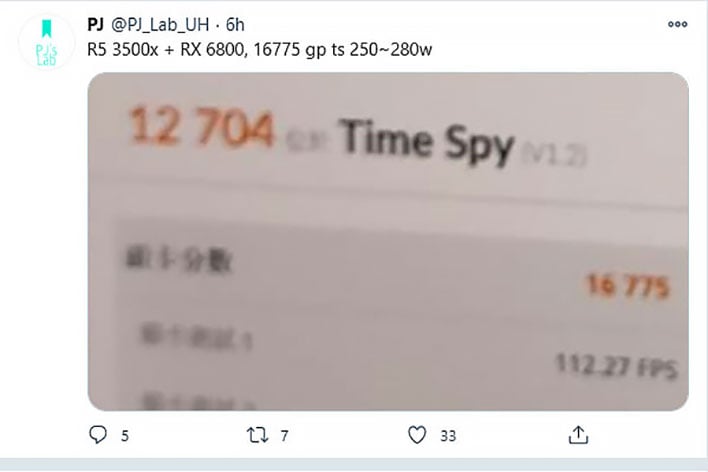 That means that this leaked Radeon RX 6800 has, in theory, a 20% advantage in graphics-only performance on this test. Remember that the MSRP of the Radeon RX 6800 is around $80 more than the base price of the GeForce RTX 3070 Founders Edition, so it stands to reason it AMD's forthcoming upper-midrange card should have the upper hand.

AMD has a prime opportunity with its new RDNA 2 architecture found in the Radeon RX 6000 family of graphics cards. NVIDIA has struggled time after time to get its GeForce RTX 3000 series of graphics cards out in quantities to satisfy the market. Even the latest launch of the GeForce RTX 3070 was another exercise in frustration where only the only abundance was scarcity. If AMD wants to make a splash, it'll need to have plenty of cards on the market when Big Navi launches at retail next month.