AMD has not yet ported its second generation Radeon DNA (otherwise known as RDNA 2) graphics architecture to the mobile side of things yet, but you can bet it will happen. A launch might even be right around the corner. Potential proof of this can be seen in a breakdown of AMD's latest GPU driver, which references a Radeon RX 6600M part.
The only consumer RDNA 2 parts that officially exist right now are all on the desktop, consisting of AMD's flagship Radeon RX 6900 XT ($999 MSRP), followed by the Radeon RX 6800 XT ($649 MSRP), Radeon RX 6800 ($579 MSRP), and Radeon RX 6700 XT ($479 MSRP). AMD's desktop lineup will be fleshed out with lower priced options in time, at least in regards to MSRPs (the GPU shortage has wreaked havoc on pricing and availability).
Whenever AMD gets around to launching its RDNA 2 architecture on mobile, we expect it will be dubbed the Radeon RX 6000M series. it is further expected that Navi 22 will power the Radeon RX 6800M and Radeon RX 6700M for high-end gaming. Meanwhile, AMD's latest driver suggests the Radeon RX 6600M will be based on Navi 22.

This was initially spotted by Komachi, a prominent leaker on Twitter, who posted "AMD Radeon RX 6600M: Navi 23 0x73FF/0xC3," which the folks at Videocardz later found while digging through the Adrenalin 21.4.1 driver code. Coming straight from the horse's mouth, so to speak, this is as close to a confirmation as we can get, short of AMD formally introducing the new SKU.
The driver does not dish up any juicy details, though looking at other leaks around the web, the Radeon RX 6600M could arrive with 28 compute units and 1,792 stream processors, paired with an unspecified amount of GDDR6 memory. As a point of reference, the desktop Radeon RX 6700 XT features a Navi 22 XTL graphics chip with 36 compute units, 2,304 stream processors, and 6GB of GDDR6, with a 192-bit memory bus. 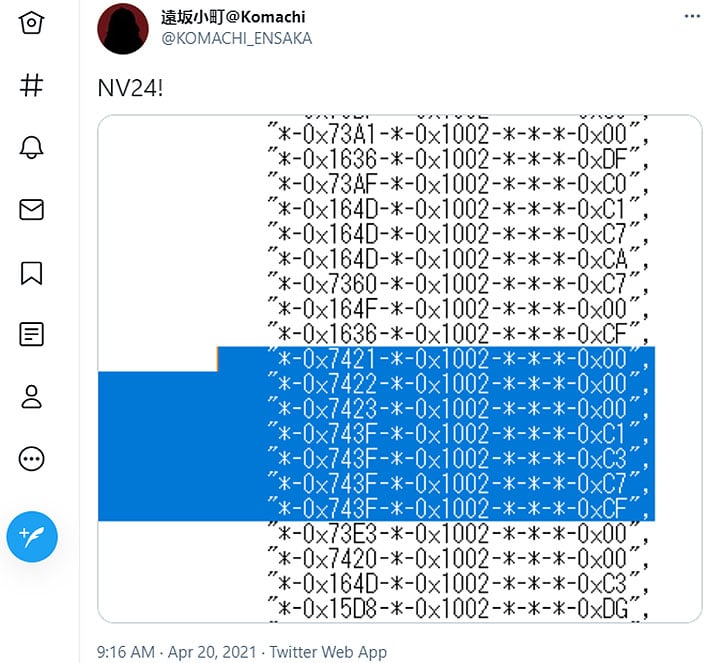 The driver code also references a handful of presumed Navi 24 parts, for both the desktop and mobile. There are seven sub-IDs in all (not necessarily representative of seven actual products), which you can see highlighted above. There are no existing graphics solutions that leverage a Navi 24 GPU, but it looks like that is about to change, if the latest driver code is any indication of what's to come.
It will be good to have some competition in the mobile GPU space. NVIDIA has already launched its mobile GeForce RTX 30 series based on its latest generation Ampere architecture, and those are the most tantalizing options at the moment. We'll have to wait and see how AMD's upcoming mobile GPUs fare.