AMD has barely exited the virtual stage after having launched the Radeon RX 6700 XT earlier this week, the newest addition to its RDNA 2 lineup with 1440p gaming in its sights, and already there is a rumor of a Radeon RX 6500 series being around the corner. Or more accurately, a rumor of a Navi 23 GPU that is likely to comprise the Radeon RX 6500 series.
Nothing in that regard is remotely official, of course, so keep that in mind when processing the details. That said, there is chatter of a Navi 23 GPU codenamed Dimgray Cavefish that is built for "premium 1080p gaming" (and also to power a refreshed Tesla Model S, based on a previous rumor). While only AMD knows if that is the case, it is certainly plausible, given that the Radeon RX 6700 XT is pretty much a 1440p card. 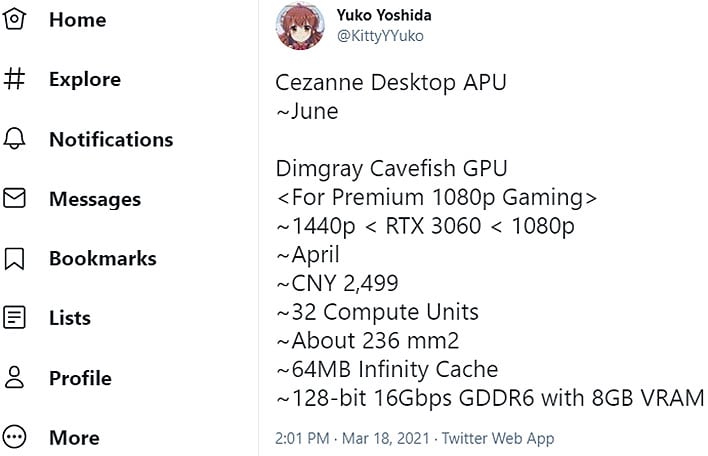 The rumored information comes by way of Yuko Yoshida (@KittyYYuko on Twitter), a prominent leaker who also goes by KittyCorgi. According to Yoshida, the Navi 23 GPU will sport 32 compute units, which works out to 2,048 stream processors.
It will also feature 8GB of GDDR6 memory (16Gbps) squeezing data through a narrow 128-bit memory bus, and 64MB of Infinity Cache. This will all be wedged into a die that measures 236mm2. For comparison, Navi 22 measures 335mm2 and packs up to 40 compute units (Navi 22 XT) for 2,560 stream processors. That is what powers the Radeon RX 6700 XT, which has 96MB of Infinity Cache and a 192-bit memory bus.
I'm not sure how to parse the "1440p < RTX 3060 < 1080p" line, other than to say that is the level of performance Navi 23 will purportedly achieve, possibly. As for the other details, the upcoming part is said to be launching in April for 2,499 Chinese Yuan, which is around $384 in US currency.