Yesterday, we reported on the refreshed Tesla Model S, which is available in Plaid and Plaid+ versions with a 1,020-horsepower tri-motor setup, an all-new interior, and some slightly tweaked styling up front. One rather curious mention with regards to the new Model S, however, came with its ability to play high-end video games on the 17-inch center display for the front passengers and the 8-inch rear display for the rear passengers.

Tesla says that there is "up to 10 teraflops of processing power" on-hand to deliver a gaming experience "on-par with today's newest consoles". That's a rather bold statement, but seems within reason given that the PlayStation 5 is rated at 10.28 TFLOPs and the Xbox Series X is rated at 12 TFLOPs. Both the PlayStation 5 and Xbox Series X are using custom AMD Zen 2/RDNA 2 hardware, and it appears now that the Model S is using something similar. 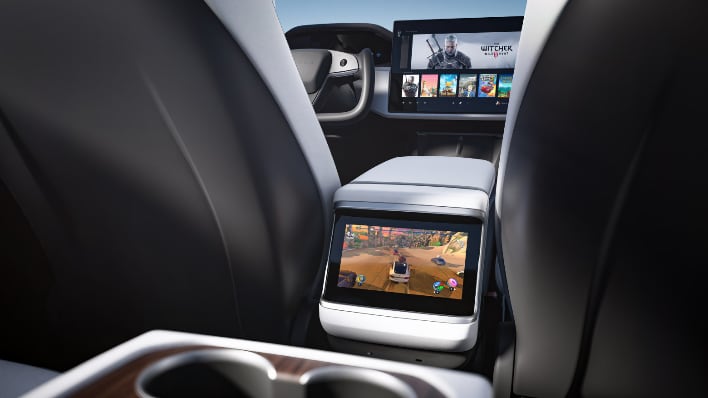 Hardware leaker Patrick Schur has leaked what he claims to be a block diagram for the hardware inside the Model S, and it includes a RDNA 2-based Navi 23 GPU. According to the block diagram, we're looking at a GPU that is paired with 8GB to 14Gbps GDDR4 memory (2GBx4) operating on a 128-bit interface. This should give the Navi 23 around 244GB/sec of bandwidth, although it's indicated here that the GPU will feature a PCIe 3.0 interface instead of PCIe 4.0 (perhaps for power consumption reasons).

As for external displays, the Navi 23 supports a single HDMI 1.4 connection and up to two DisplayPort 1.2 connections.

We've seen in Tesla's stock photography (or rather renders) that the Model S can run The Witcher III, and Elon Musk took to Twitter to confirm that it can also play Cyberpunk 2077.

It can play Cyberpunk

The ability to play high-end PC games on a Model S (and the similarly revised Model X) was an unexpected perk with the redesigned vehicle. However, all this gaming goodness is going to cost you. The Model S Long Range starts at $79,990 and goes up to $139,000 for the Model S Plaid+. The new Tesla Model S is currently available for preorder.