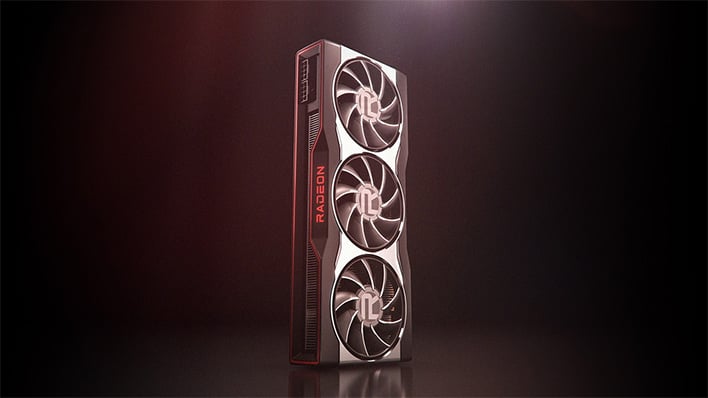 Halloween is right around the corner, but even closer is the official launch of AMD's highly anticipated Radeon RX 6000 series, based on the company's second generation Radeon DNA (RDNA 2) graphics architecture. Our questions will finally be answered. For example, will it have a 320W TBP (total/typical board power) rating as freshly rumored?
Power envelopes are always interesting, in part because higher powered parts typically produce more heat and require burlier cooling setups, to run at their advertised and/or optimal speeds. Sometimes companies take a brute force approach to obtaining higher clockspeeds (and better performance) by going nuts with the power requirements.
The topic also gets a little muddied because of the sometimes confusing nomenclature. Igor Wallossek at Igor's Lab does an excellent job of breaking it down, however, in relation to a recent leak suggesting AMD's Navi 21 XT GPU will have a 255W TGP (total graphics power) with a 2.4GHz game clock, while Navi 21 XL will have a 220W power envelope for the entire card.
"This is not only wrong, but suggests an efficiency that unfortunately does not exist in this form. AMD calls the power consumption of the entire card TBP (total/typical board power) while NVIDIA calls the equivalent TGP (total graphics power)," Wallossek explains.
The values that were previously leaked as TGP were actually just referring to the pure power consumption from the GPU socket, which itself includes the GFX controller (VDDCR_GFX), SOC controller (VDDCR_SOC), along with voltages for the memory as VDDMEM and VDDCI (memory controller and bus).

For the Navi 21 XT GPU, the GPU accounts for 235W (VCCCR_GFX + VDDCR_SOC + VDDCI) and 16GB of memory adds another 20W (VDDMEM) to the equation, to arrive at the previously leaked 255W figure. That is all well and good, but there is more that factors into the true total board power, as outlined in the chart above.
Why does this matter? Well, when you add in the other bits, the overall power envelope Navi 21 XT matches the listed 'Graphics Card Power' for NVIDIA's GeForce RTX 3080, which is also at 320W. Likewise, custom models by AMD's hardware partners that are factory overclocked will kick things up a notch, to 355W overall.
None of this is official information, of course. However, it does underscore why leaked specifications should always be looked at with a skeptical eye—sometimes they're flat out wrong, and in cases like this, they might not paint a full picture.
In any event, the Radeon RX 6000 series will be unveiled on October 28.