This is going to be an interesting year for AMD (and consumers) in the graphics space. We know AMD is working on a more powerful version of Navi with hardware-level support for real-time ray tracing, though in the more immediate future, there is a Radeon RX 5600 XT graphics card in the wings, and perhaps a Radeon RX 5600M mobile GPU as well.
There have been several leaks pointing to a Radeon RX 5600 XT graphics card, the most telling coming from one of AMD's hardware partners, ASRock, which jumped the gun and posted a product page with a list of specifications. While not a confirmation in the strictest sense, it's the closest we have to one, without hearing from AMD itself.
On the mobile side, however, Twitter user "_rogame" spotted a 3DMark benchmark database entry for a laptop sporting an unannounced Ryzen 7 4800H "Renoir" APU paired with what reports are presuming to be a Radeon RX 5600M GPU. The listing does not specifically reference the latter—it's simply labeled as "Generic VGA"—but does point to the mystery GPU as having 6GB of GDDR6 memory. This is potentially revealing, because AMD does not yet offer a version of Navi with 6GB of GDDR6 memory, but soon will with the launch of the Radeon RX 5600 XT.
The listing compares the Radeon-based system with a laptop running an Intel Core i9-9980H processor paired with an NVIDIA GeForce RTX 2060 GPU. Note that this appears to be the full fat version of the RTX 2060, and not a Max-Q variant. Have a look... 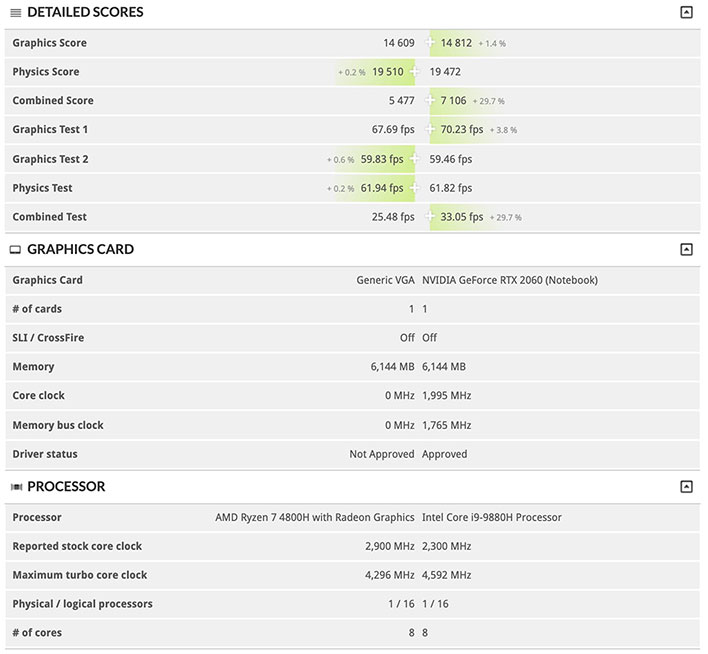 Notice the Graphics Score at the very top. The two GPUs are neck-and-neck, with the GeForce RTX 2060 squeaking out a sliver of a victory, scoring just 1.4 percent higher (14,812 versus 14,609). From there, the two GPUs trade blows when breaking things down individually.

We don't want to read too much into this, because for one, we don't have many details on the supposed Radeon RX 5600M, nor do we know for sure if that is what this listing represents (it could also be a mini PC or desktop configuration with a Radeon RX 5600 XT, or something else entirely). Secondly, design tweaks and drivers can both play a role in final performance.
Nevertheless, it is an interesting comparison. Assuming this is a Radeon RX 5600M, the benchmark listing suggests performance will be on par with a full fat GeForce RTX 2060. It also hints at laptop vendors pairing the mobile GPU with AMD's Renoir APUs, at least in some cases. Depending on how pricing shakes out, the next round of AMD-powered laptops could be enticing.