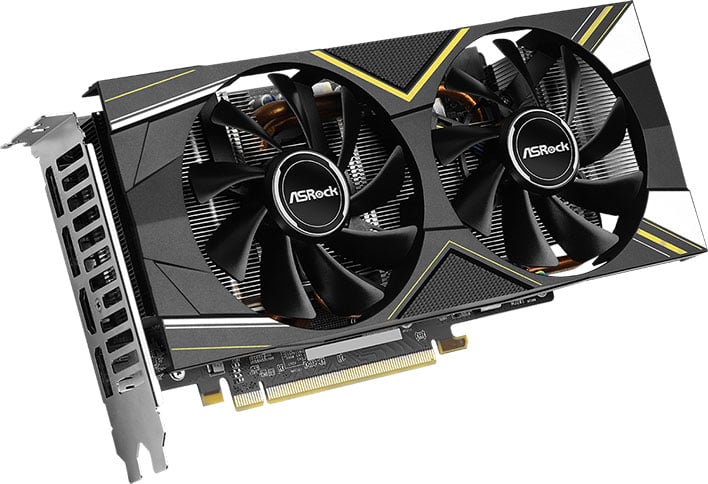 AMD has certainly had better launches than the Radeon RX 5600 XT. The card itself is fine, but where AMD fumbled the launch is by dishing out a BIOS update to its OEM partners at the final hour, to goose the memory from 12Gbps to 14Gbps, to contend with NVIDIA's GeForce RTX 2060 price cut. Now several months later, AMD has posted a list of which models support the faster 14Gbps memory specification, either out of the box or by way of a firmware update.
For example, the list says PowerColor's Red Dragon Radeon RX 5600 XT sports 14Gbps memory out of the box, while MSI's Radeon RX 5600 XT Mech requires a firmware update. If your card is not on the list and is running the memory at 12Gbps, you are probably stuck at that slower speed. How can that be?
MSI attempted to explain the situation several months ago, but was not clear in its message. During a livestream, MSI's marketing director Eric Van Beurden and product marketing manager Pieter Arts seem to suggest that the memory chips sampled to AMD's partners were only validated to operate at 12Gbps, so hitting 14Gbps would be hit or miss.
My understanding is that all of the memory chips on Radeon RX 5600 XT cards can actually run at 14Gbps, so the issue is not the chips themselves. Instead, it's how the cards are designed and validated—there are different power and cooling requirements involved, so it's not always as easy as just flipping a switch. AMD's updated firmware essentially bumps up the power delivery to the card and memory.

Regardless, this whole thing created a messy situation for AMD's hardware partners. The onus fell on them to provide their own tuned firmware updates to the public (based on AMD's updated firmware), with instructions on how to flash their cards, and then hope for the best.
Here's the list...
If buying a new card, you're probably best served by sticking to one of the models that is confirmed to ship with 14Gbps out of the box. Otherwise, you may need to flash the BIOS for the faster memory speed, if it doesn't arrive with the updated firmware.