The need for fast wireless connectivity has never been greater than it is right now, and there are efforts at play to ensure the speed and features for a modern workforce are there for the taking. One of those efforts is a collaboration between AMD and Qualcomm to optimize the latter’s FastConnect connectivity system with the former’s Ryzen Pro 6000 series mobile processors based on Zen 3+.

There are multiple benefits to this team effort. One of those is speed, with Qualcomm’s FastConnect 6900 solution promising wired-class performance over a wireless connection. FastConnect 6900 is an advanced 14nm 2x2 mobile connectivity system supporting peak speeds of up to 3.6Gbps. 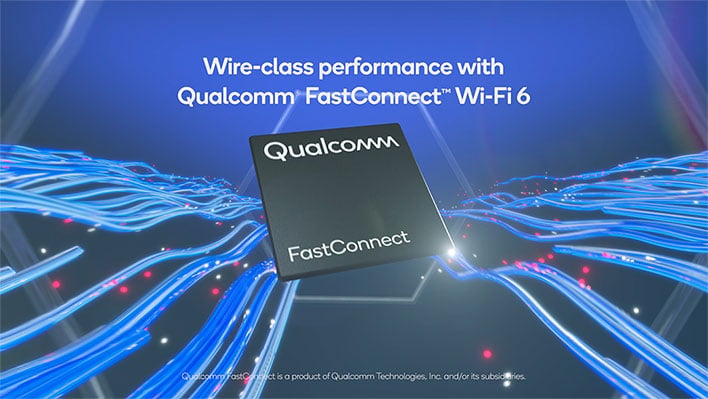 It also promises ultra-low latency to facilitate extended reality (XR) and gaming applications, both of which are important as the industry shifts its focus to the emerging metaverse.
What this collaboration boils down to is enhanced Wi-Fi 6 and Wi-Fi 6E connectivity for Ryzen Pro 6000 powered business laptops, enabled with Windows 11.
“In collaboration with Microsoft, next-generation Windows 11 PCs, such as the Lenovo ThinkPad Z Series and HP EliteBook 805 Series, can harness the full potential of Windows 11 Wi-Fi Dual Station through Qualcomm 4-Stream Dual Band Simultaneous. Multiple Wi-Fi bands outperform traditional single-band connections for improved video conferencing experiences, reduced latency, and enhanced connection robustness,” Qualcomm says.
The other upshot here is this brings remote Wi-Fi management capabilities to IT administrators through AMD’s Pro technologies suite. When paired with Qualcomm’s FastConnect 6900 system, this effort enables wireless manageability with support for dozens of widely used Open Standard-Based (DASH) profiles.
“Out-of-band Wi-Fi remote management is an important tool for enterprise IT managers to diagnose and fix issues, even when the operating system is not running,” said Jason Banta, CVP and General Manager, OEM Client Computing, AMD. “AMD Ryzen Pro 6000 Series processors with Qualcomm FastConnect 6900 enable next-generation business laptops to have the processing and connectivity tools needed to perform in modern environments, offering professional-strength remote manageability for users in the new, hybrid workplace.”
This joint effort comes at a time when hybrid workplaces have never been more common, which heightens the need for secure remote Wi-Fi management.