AMD Promised AM5 Motherboards Would Start At $125 So Where Are They?

No matter if you search high and low or far and wide, you'll be hard pressed to find a socket AM5 motherboard for less than around $150. Many of the initial entries cost north of $200, and a few even top $1,000. Here's the thing, though—AMD said users could expect AM5 motherboards to start out at $125, but it's been two months since Zen 4 launched and we've yet to see any compatible boards for that price.
In a sign that users are perhaps growing impatient, this was brought to attention in a Reddit post that has amassed over 2,500 upvotes. The post calls to attention this part of AMD's slide deck from its "together we advance_PCs" event in August, in which the company formally introduced its first batch of Ryzen 7000 series processors and next-gen chipsets. 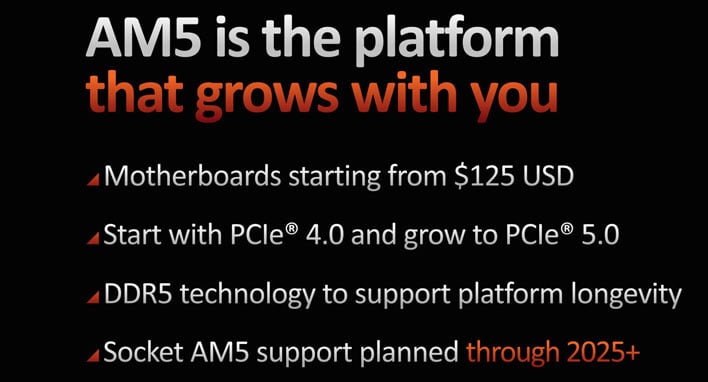 To quickly recap, AMD introduced a new socket and several new chipsets for its Ryzen 7000 series CPUs. Socket AM4 enjoyed a relatively long run of relevancy, and AMD has committed to supporting its AM5 socket through 2025 and beyond, as outlined in the above slide. It also stated that boards would start at $125—an important promise, given that Zen 4 requires more expensive DDR5 (compared to DDR4) memory.
The aforementioned Reddit thread asks where those elusive $125 motherboards are at, and one the prevailing theories is that motherboard makers are "taxing the early adopters." There's really no way to prove or disprove that without knowing their costs and other factors, but the point remains—the first run of socket AM5 motherboards well above $125.
Poking around, the cheapest option we could find is ASRock's B650M PG Riptide for $149.99 on Newegg. That's actually a sale price, as its MSRP sits at $169.99. It's also on backorder. Here are a few other AM5 motherboards...
And on the opposite end of the spectrum, you have ultra high-end boards with premium pricing like the ASUS ROG Crosshair X670E Extreme for $999.99 and the MSI MEG X670E Godlike Gaming for $1,229.99 (sale price).
The only real answer here is patience. We've already seen AMD lower the price on its initial Ryzen 7000 series CPUs, and in time we suspect some AM5 motherboard options will inch closer to that promised $125 starting price (undoubtedly based on the B650 chipset). If we had to guess, we'd say we'll see this happen sometime around CES when AMD is expected to flesh out its Zen 4 lineup with more affordable CPUs.