AMD's 300-series chipsets, including the B350 and X370 among others, had an incredible run of CPU support in their four years on this earth. While it was a little late to the party, most X370 and B350 motherboards received official support for AMD's Zen 2 Ryzen 3000 family of processors in 2019. Earlier this year, it seemed that even the Zen 3-based Ryzen 5000 family would run on 300-series motherboards. Unfortunately, the gravy train for the AMD's first Socket AM4 chipset may have just run dry.

It all started with a Reddit thread in the /r/ASRock subforum about 10 days ago. The now-ancient X370 Taichi and X370 Professional Gaming had BIOS updates listed with version 6.62. Currently, the only updates available for these boards on ASRock's website stops with 6.40, so there must be something interesting in there. As it turns out, this update includes AGESA version 1.1.0.0, which is required for the Zen 3 processors in the Ryzen 5000 family. It wasn't long before users caught wind and started upgrading their boards. 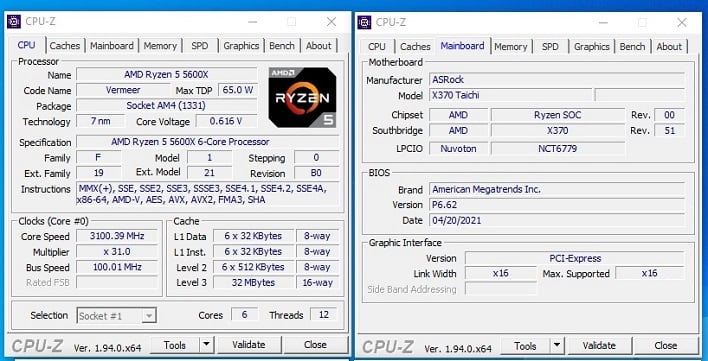 In the forums for German retailer JZ Electric, an admin who goes by the handle JZ uploaded screenshots of CPU-Z including this BIOS. The ASRock Taichi X370 was running version 6.62, and served as the host platform for a Ryzen 5 5600X. It seemed that the four-year-old platform would ride again, and receive an update for AMD's latest processor family. However, the story doesn't end there. JZ took to the German-speaking HardwareLuxx forums to post part of a conversation with an ASRock representative. It seems that the beta BIOS was not intended for public consumption.

Unfortunately, we received AMD’s warning that X370 shouldn’t supports Vermeer CPU. Obviously, some customer didn’t operate it under table, AMD noticed it and said ASRock shouldn’t do this anymore.

The attached file is BIOS and it is the last BIOS which I can provide for you in this case, please pass it to user under table.
Thanks,


Assuming this message is on the up-and-up, it seems AMD has elected to shut down ASRock's efforts to run the latest Ryzen 5000 processors on X370 motherboards. It's worth pointing out that even the Ryzen 3000 series required some compromises and carried a few caveats. Because vendors didn't use large enough flash chips for the BIOS, nearly all vendors had to issue BIOS support piecemeal. Upgrading from a Ryzen 1000 or 2000 series processor to Ryzen 3000 required a "bridge" BIOS that carried minimal support for both platforms, swapping CPUs, and then flashing a fully-fledged update for the new CPU. Having said all that, anybody who has an X370 Taichi and wants to give the beta BIOS a go can grab it from the /r/ASRock Subreddit.

Along with this revelation, we should not forget that AMD didn't even want to support the 400-series chipsets with Ryzen 5000 processors at first. Initially the supported platforms started and ended with the 500-series chipset family. Speaking very plainly, AMD said it had "no plans to introduce 'Zen 3' architecture support for older chipsets." After enthusiasts took to the internet to lodge their protests, AMD eventually relented, saying that 400-series motherboards could also get Zen 3 support. This has a very different feel to it, though; support was being built and AMD apparently pulled the rug out from under the ASRock engineers who were working to bring support to the oldest AM4 platform. If that's the case, it's disappointing, but as one Redditor pointed out: AMD is a company, after all.