As of late, AMD has been dominating in the desktop processor space. Its latest Ryzen 5000 Series CPUs have taken the lead over Intel, and people are looking to upgrade as a result. However, one of the pain points has historically been the need to upgrade motherboards for a new generation of CPUs, though is almost a non-issue for most socket AM4 boards.  Regardless, people have been finding ways around motherboard compatibility, with modded BIOS updates or even perhaps discovering their old 300 series motherboards actually can work with new Ryzen 5000 series CPUs.

In May, we got word that Zen 3 processors would work with 500 Series motherboards only. That stance was then changed so 400 series and above would work with Ryzen 5000 series CPUs after a BIOS update. Ryzen 5000 support may go back even further, though, as a forum user by the name Brko claims on overclock.net that he knows of a Gigabyte X370 motherboard with a beta BIOS running a Zen 3 processor. As he states in his post, “any story being pushed about 'these boards are obsolete' is utter horse$**t,” but board manufactures must actually release the BIOS update so these boards do not become obsolete. 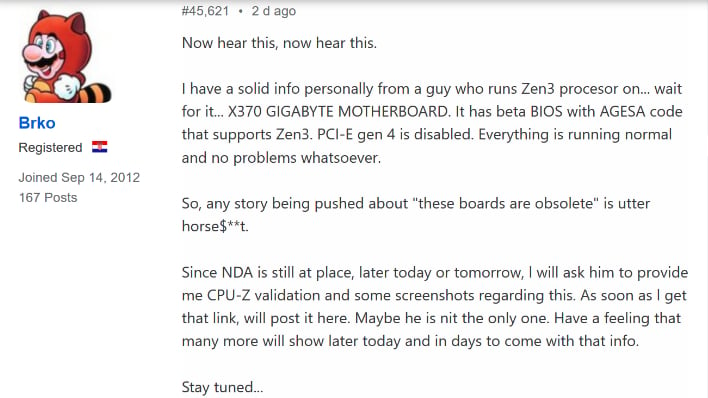 In theory, a BIOS update to let some X370 motherboards work with Ryzen 5000 series CPUs should be possible, aside from Brko's claims. This has been somewhat proven by chm128256m, a forum user at chiphell.com. He showed pictures of his Asrock A320M motherboard with a Ryzen 9 5900X shoved into it. The BIOS he has running is not an official version, though, as he modded it to make it work. That is where the in theory this should work comes into play. If an A320 board can run a Ryzen 9 5900X, then higher tier boards should be able to as well, should manufacturers release an official update. 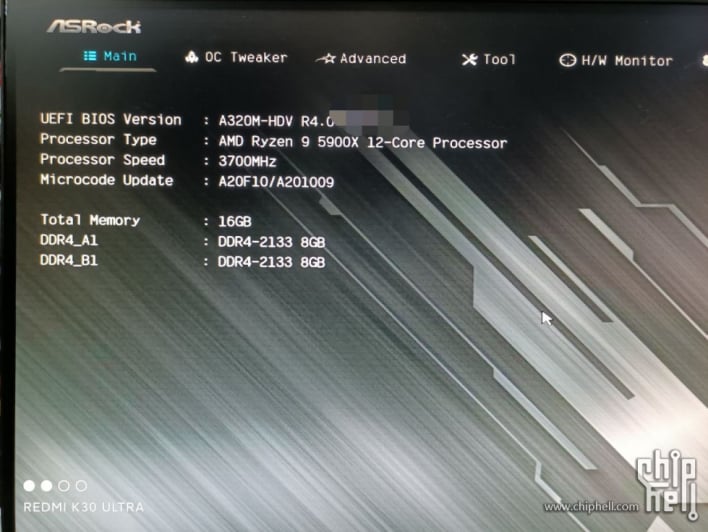 Obviously, AMD is not likely to officially support this backward compatibility, otherwise it already would have been announced out of the gate. Also, it becomes a financial thing, where both AMD and board manufacturers probably also want customers with aging systems to migrate, so as to capture new upgrade sales. We will have to see which motherboard OEMs step out with backwards compatibility updates, and it will be interesting to see if there are any performance dings or just oddities that crop up. What do you think of the backward compatibility possibilities? Do you think it would be more worthwhile to upgrade and get new connectivity features like PCIe 4, or rather just keep an older board and upgrade the BIOS for Ryzen 5000? Let us know in the comments below.