For those of you who are clinging to an older generation AMD Radeon graphics card, good news—support for the company's fancy new FidelityFX Super Resolution upscaling technology is being expanded to include the Radeon RX 480 and Radeon RX 470, both of which launched around five years go. Kudos to AMD for the decision to support the older cards.
If you have not been following the graphics scene, FidelityFX Super Resolution is AMD's answer to NVIDIA's Deep Learning Super Sampling (DLSS) technology. Both aim to improve performance at higher resolutions by upscaling images. It takes less GPU horsepower to render a scene at a lower resolution and then upscale it, but what about image quality?
In our opinion, NVIDIA's latest DLSS 2.0 technology does a great job at intelligently upscaling, more so than the original implementation (DLSS 1.0). Likewise, we're hoping the same is true of FSR. To help with that, AMD said users will be able to choose from four different quality modes—Ultra, Quality, Balanced, and Performance.
AMD used Godfall as an example, rendered with a Radeon RX 6800 XT graphics card. Running the game natively at 4K and at the Epic preset with ray tracing turned on yields 49 frames per second, according to AMD's testing. Leveraging FSR, however, that gets bumped up to 78 FPS for Ultra, 99 FPS for Quality, 124 FPS for Balanced, and 150 FPS for Performance.
What about support? One of the major pros of FSR is that it is an open source technology, so technically it can work with just about any graphics card. AMD even showed an example of Godfall netting a 41 percent improvement on a GeForce GTX 1060 graphics card. 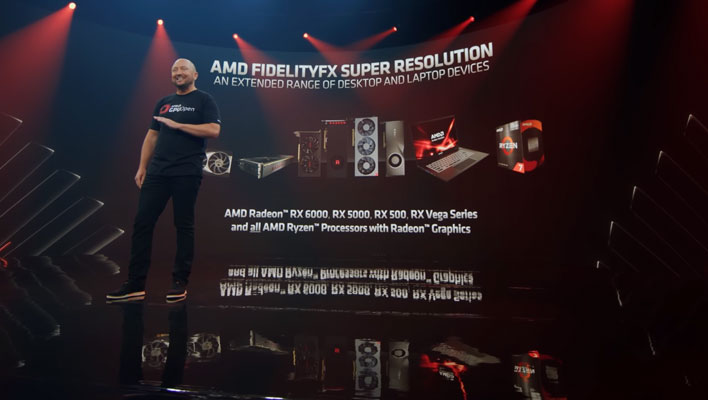 This still requires driver optimizations on the part of the GPU maker, and to that end, AMD initially said it would support FSR on its entire ranges of Radeon RX 6000 and Radeon RX 5000 series cards, as well as its Radeon RX Vega products and the Radeon RX 500 lineup. Same goes for all AMD Ryzen processors with Radeon graphics (APUs).
Turns out AMD is not stopping with that already impressive lineup of GPU hardware. A Radeon Community Team member confirmed on Reddit that even older Polaris parts are making the cut as well.
"I just wanted to pass on the news that we are updating the list of compatible AMD graphics for FidelityFX Super Resolution (FSR) to include Radeon RX 470 and RX 480. We expect the website to be updated with this information sometime soon and we wanted to make sure you were aware. Looking forward to having you all try FSR out on the 22nd," the team member stated.
That's great news, especially in the current landscape. Trying to buy a GPU right now is nothing short of a frustrating experience, and the whole idea of FSR is to boost frame rates "without having to upgrade to a new graphics card." So adding the Radeon RX 480 and Radeon RX 470 into the mix is a good move by AMD.
As to the open source nature of FSR, Intel graphics boss Raja Kodoru stated on Twitter that this is something the team is "definitely looking at" in regards to Intel's Xe-HPG graphics chip for gaming. So, we'll see. And as for running FSR on a GeForce card as was demonstrated, AMD's Scott Herkelman said it would be up to NVIDIA whether or not to release embrace the open standard.
"We are very excited to have you all try it out. Just to be clear though—we aren't optimizing it for GeForce— that will be up to them to do the work on behalf of their gaming community. We just proved it works," Herkelman said.
It's probably unlikely NVIDIA will put much effort into it, though, since it has put so much time and effort into its proprietary DLSS technology. But hey, as the great philosopher Kevin Garnett once accurately said, "Anything is possible!"