Zen 3-based Ryzen processors showed some really outstanding performance on the desktop when we looked at the Ryzen 9 5900X and 5950X. In the high-performance computing server space, though, 12 to 16 cores is the bare minimum, and systems only scale up from there. AMD has yet to announce its Zen 3 EPYC CPU platform, codenamed Milan, but configuration and performance scores are starting to leak online. The core count is purportedly huge and the performance looks to be through the roof.

Thanks to leaker ExecutableFix on Twitter, we've learned that the EPYC 7763 is a Zen 3 chip with 64 cores, giving it 128 hardware threads with symmetric multithreading, which is paired up with 256 MB of L3 cache. The core and thread counts match the existing EPYC 7742, but with Zen 3's better IPC performance. The rumored EPYC 7763's 280 Watt TDP supposedly provides enough headroom for a base clock of 2.45 GHz and a maximum boost clock of 3.5 GHz. With two of these chips in tandem, that's an enormous 128 cores and 256 threads of Zen 3 power. 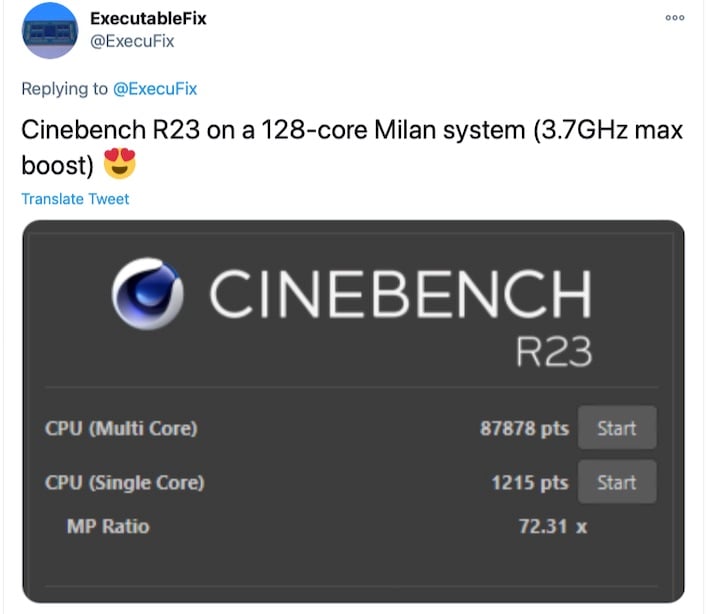 According to ExecutableFix, such a system can achieve a Cinebench R23 score of 87,878. Unfortunately most of our Cinebench scores in recent reviews are for version R20, but we do have one point of comparison. Apple's octo-core M1 Mac mini topped out at 7665, so the EPYC server was around 11.5x faster than Apple's tiny desktop CPU. In other words, the EPYC 7763 appears to have parallelism in spades. 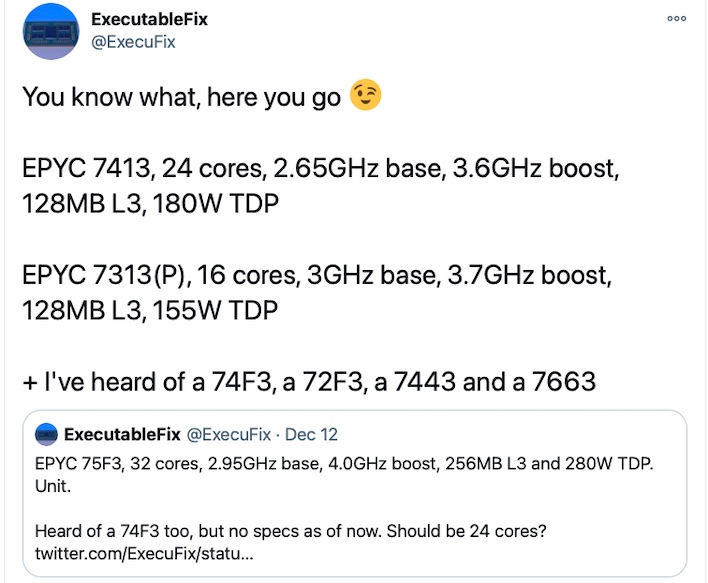 All that parallelism should give AMD a leg up on very wide CPU loads that require a lot of hardware threads. Zen 3's improved single-thread performance will no doubt bolster EPYC's performance as well. Last month, Intel compared its new Ice Lake-based 32-core Xeon processors to the 64-core EPYC 7742 and claimed that the Xeons thumped AMD despite having fewer cores. Most of those loads required the higher memory bandwidth afforded by Xeons and the AVX-512 instruction set. That situation hasn't changed with Zen 3, so Intel might still have a few edge case wins. Regardless, AMD looks like it will be even more competitive in the server space once Milan EPYC CPUs launch.