The best thing to ever happen to AMD was not the introduction of Zen or getting into discrete graphics. As great as those have both been to AMD, the company's best move was naming Dr. Lisa Su as president and CEO six years ago this month. If at this point anyone still needs more proof, they need only look at AMD's third quarter earnings report, which reflects yet another stellar quarter under Dr. Su's leadership.
By singling out Dr. Su, I mean no disrespect to AMD's talented engineers, its marketing people, or anyone else. They have all played an important role in AMD's turnaround and continued success. But it starts with leadership, and Dr. Su has expertly navigated AMD into relevance and, more importantly for share holders, continued profitability, which was not always the case (good thing for AMD those IBM rumors turned out to be false).

It certainly is the case now. AMD is coming off a record third quarter in which it earned $2.8 billion in revenue, a massive 56 percent rise compared to the same quarter last year and 45 percent sequentially, to go along with an operating income of $449 million and net income (profit) of $390 million. This is in stark contrast to the days when I and others wondered how long AMD could hold on after repeated losses. Those days seem like ancient history now.
AMD credited its record revenue to gains in its enterprise, embedded and semi-custom, and computing and graphics segments.

"Our business accelerated in the third quarter as strong demand for our PC, gaming and datacenter products drove record quarterly revenue," said Dr. Su. "We reported our fourth straight quarter with greater than 25 percent year-over-year revenue growth, highlighting our significant customer momentum. We are well positioned to continue delivering best-in-class growth as we further extend our leadership product portfolio with the launches of our next generation Ryzen, Radeon and EPYC processors." 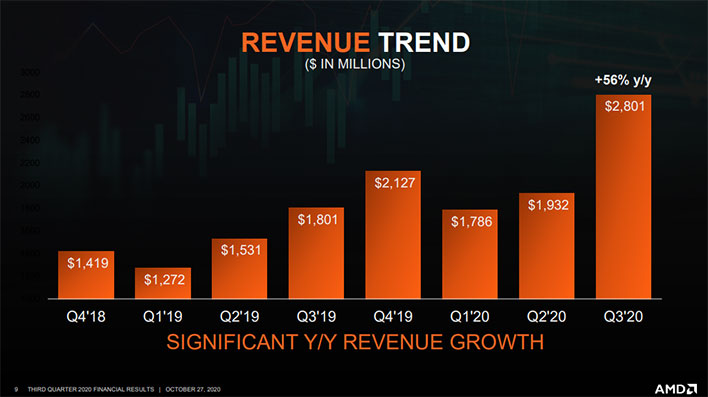 AMD's gains have been impressive, and they are coming nearly across the board. In its computing and graphics segment, which includes Ryzen processors and Radeon GPUs, AMD earned $1.67 billion in revenue in Q3. That is up 31 percent year-over-year, which AMD accounts to a "significant increase in Ryzen processor sales." This was partially offset by lower graphics revenue, but with the Radeon RX 6000 series (RDNA 2) and Ryzen 5000 series (Zen 3) about to land on store shelves, AMD finds itself in tremendous shape.
In its combined enterprise and embedded and semi-custom segments, revenue reached $1.13 billion, up 116 percent year-over-year and 101 percent sequentially. This is partially due to ramped production and shipments of next-gen console SoCs, as AMD is powering the Xbox Series X, Xbox Series S, and both PlayStation 5 models.
Looking ahead, AMD anticipates finishing the year with around $3 billion in revenue for the fourth quarter, which would represent a 41 percent uptick from last year and 7 percent sequentially. AMD also adjusted its full-year guidance from a 32 percent increase in revenue to 41 percent.
This is likely to excite investors, as is AMD's definitive agreement to acquire Xilinix for $35 billion, as announced today.