It was recently discovered that the AMD Software (formerly Radeon Software) driver utility is secretly changing CPU parameters in the BIOS on some PCs. This isn't some sinister play on AMD's part, but an apparent driver bug. AMD confirmed as much in a statement, saying it is "aware of an issue in the AMD software suite that is adjusting certain AMD processor settings for some users."
Fortunately, most users affected by this probably won't even notice something is awry unless they specifically look for it. We have not see any reports of the software package making any over-the-top changes. However, there is the theoretical potential for an affected Ryzen system to run a little warmer than usual. And on the flip side, this bug could muck with carefully tuned settings the user had put in place.
The latter seems the more likely scenario, according to one of the known issues outlined in AMD's Adrenalin Edition 22.4.1 driver update that dropped yesterday.
"Ryzen CPU Overclock settings may be changed after resetting or importing a profile from Radeon Performance Tuning Options," AMD states in the release notes. 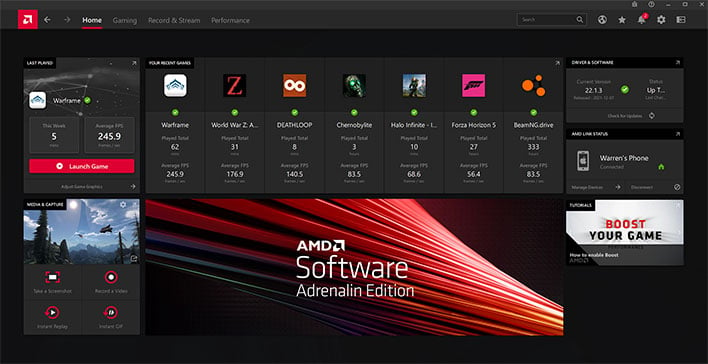 This particular bug is a byproduct of AMD integrating its Ryzen Master utility into its software suite last year to enable an auto overclocking feature. For users who don't want to tinker with voltage and frequency settings in the BIOS, AMD's software makes it incredibly easy to tune their Ryzen CPU and/or Radeon GPU for better-than-stock performance.
The issue here is that the software utility is, on some systems, taking matters into its own hands without the user's permission. If you own a Ryzen PC and it is suddenly unstable, this could be why.
AMD did not issue a time line for when a fix will be available, but one is definitely coming. In the meantime, you can install the latest Adrenalin Edition driver to enable support for Unreal Engine 5 and City Sample. It also squashes a few bugs not related to overclocking. They include...
You can update the driver through the AMD Software utility, or grab it from AMD's driver page for a manual installation.