We were generally fairly impressed with the Radeon RX 7900 XTX when we tested it, but a few folks who purchased the new card have been seeing red, and not just Radeon red. Specifically, we're talking about the red of a thermal alert when the card hits 110ºC after just a few minutes gaming. If you're affected, just call AMD or your AIB partner (whoever sold you the card) for a replacement, says Scott Herkelman.


In case you don't know who Scott is, he's the SVP & GM of Graphics at AMD, so he definitely knows what he's talking about when it comes to company policy. Speaking to PC World in an interview on the CES 2023 show floor, Scott says that AMD has identified the source of the overheating problem affecting AMD's top Radeon GPUs, and that it will replace any affected cards. It's a good and clear response from AMD. 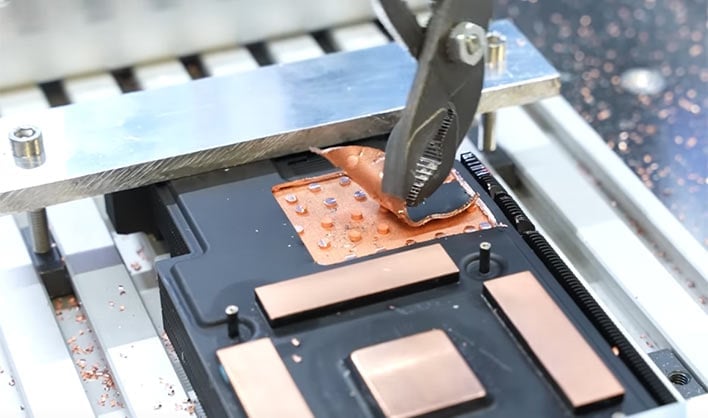 From Der8auer's investigation of the issue.


And just in case you don't know about the problem, we'll detail it for you here. A certain proportion (AMD says it is "a small percentage") of Radeon RX 7900 XTX cards based on the reference design, and using the original AMD cooler, suffer an issue where, when they are tilted horizontally (that is, the way they would be oriented in the majority of PC tower cases), they rapidly overheat. This hurts performance and probably also isn't good for the card and GPU.


It was initially thought that the issue might be down to core contact with the cooler, but intrepid overclocker Der8auer investigated the issue quite thoroughly, right down to cutting open a vapor chamber, and discovered that the problem must certainly be down to some quality of the vapor chamber itself, but only on some cards.
So, according to Scott Herkelman, the problem is that a small number of cards got coolers that were not properly filled with liquid. As a result, it's possible for this small amount of liquid to end up getting captured far away from the GPU die, making it unable to properly evaporate and condense. Naturally, this means the vapor chamber isn't doing its job anymore, and the card overheats.

As we mentioned above, AMD says it has a way to ensure cards aren't affected in the future, so if yours is, just RMA it and AMD (or its AIB partners) will happily replace the card for you.