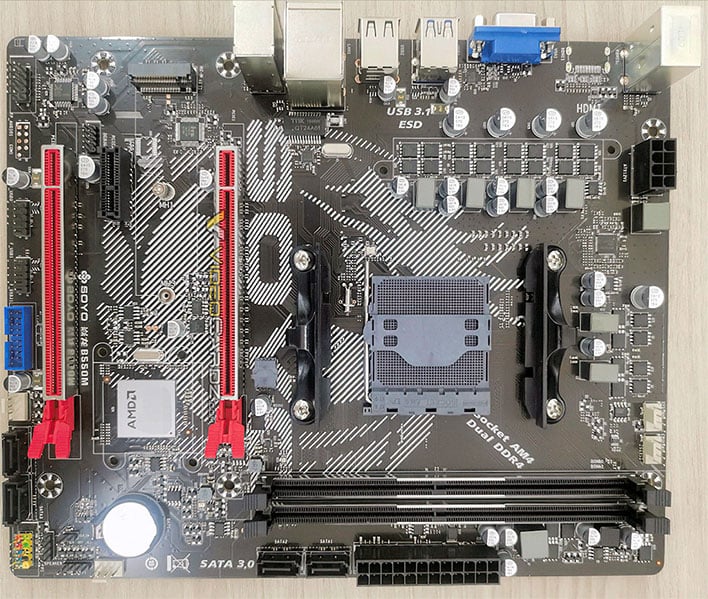 We are still waiting for AMD to formally release its B550 chipset, though based previous leaks, we know its hardware partners have several planned B550 motherboard models. There's now even a picture of an actual B550 motherboard that is out in the wild. Not to be confused with AMD's B550A chipset for OEMs, B550 is a bit of a different beast and a true upgrade over the previous generation chipsets.
Some background information is in order here. The B550A chipset is really an extension of the previous generation B450 chipset. It is only for OEM system builders, so you are not going to mosey over to Amazon or Newegg and find any B550A motherboards for sale. Technically, B550A offers support for PCI Express 4.0, though only on the primary PCIe x16 slot.
In comparison, B550 (no "A" designation) is a proper upgrade for the budget market. It features proper PCIe 4.0 support, meaning you should be able to pop a PCIe 4.0 NVMe SSD into one and benefit from the drive's full speed potential. In short, it is a true over B450 for people who want to assemble a budget-friendly Ryzen 3000 series PC.
The folks at Videocardz obtained an image (pictured up top) of an actual B550 motherboard from one of their sources at Soyo, called the Beggar 550M. It is a rather basic motherboard without a whole lot of bells and whistles.
Built around the micro-ATX (mATX) form factor for small form factor (SFF) builds, the motherboard sports an AM4 socket, two PCIe x16 slots, a pair of DDR4 DIMM slots, four SATA 6Gbps connectors, an M.2 slot, and USB 3.1 connectivity.
It does not look to be a finished motherboard—there appear to be mounting holes for heatsinks, which we imagine will be attached when the board ships to retail. Soyo does not have much of a presence in the motherboard market in the United States, so we would be surprised if this one landed stateside. Still, it's interesting to see a motherboard based on B550.
We also know that Gigabyte is planning to release a whole bunch of B550 motherboards, according to a recent listing at the EEC website. They include...
Gigabyte will have plenty of options for mATX and mini-ITX builds, as well as full-size ATX systems. And at least one of Gigabyte's models will feature built-in Wi-Fi 6 (802.11ax) connectivity.