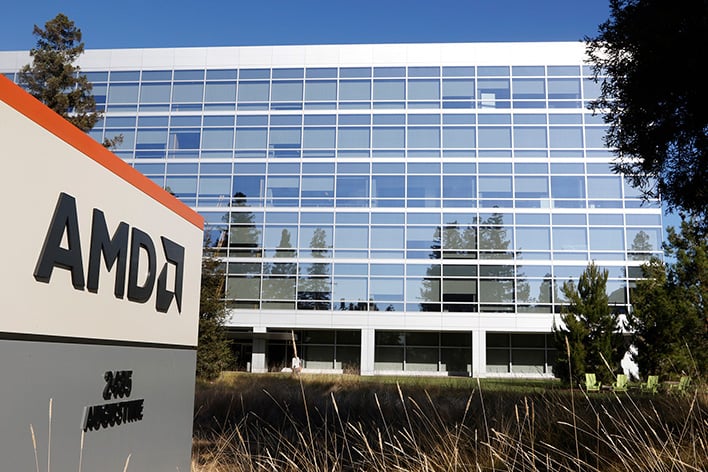 You would think yesterday's unveiling of Zen 3 would be AMD's biggest news this week, along with a performance tease of its upcoming Radeon RX 6000 series graphics cards. Arguably even bigger, however, is that AMD is reportedly in talks to acquire Xilinx, a maker of FPGA (field programmable gate array) chips, for north of $30 billion.
It would be a massive acquisition, and one AMD can afford these days, having roughly tripled its stock price over the past year. AMD now has a market capitalization of more than $100 billion, which is basically a measure of the company's value based its current stock price (a company's actual value is a little more complex).
FPGA chips differ from standard computer processors found in your PC at home because they have the ability to be reprogrammed after manufacturing, based on what a client wants to use it for. This can be especially useful in prototype applications. FPGA chips are found in numerous fields like 5G, aerospace, video and imaging, and so forth, which motivated Intel to acquired Altera for $17 billion in 2015.

Citing people who are familiar with the matter, The Wall Street Journal says a deal could be hammered out as early as next week. It could just as easily fall apart, however, as talks have come to a halt in the past before recently kicking up again.
If AMD does go ahead and acquire for Xilinix for more than $30, it would be the second largest proposed deal this year, behind only NVIDIA's intent to buy Arm Holdings from SoftBank Group for $40 billion. It would also cap off a remarkable turnaround for AMD's fortunes under the leader of Dr. Lisa Su, who became the company's chief executive officer in 2014.
Under Dr. Su, AMD has catapulted back into relevance in the high-end CPU space, both in the consumer sector (Ryzen) and data center (EPYC). It is also on the brink of launching a GPU architecture that is potentially competitive with NVIDIA's Turing GPU, and has secured wins in the console space by powering both the Xbox Series X/S and PlayStation 5.
Just as importantly, acquiring Xilinx would allow AMD to carve out a larger slice of the overall semiconductor market. It has trailed Intel in the x86 sector and NVIDIA in the GPU sector, but is making inroads.