Amazon held a virtual event today to announce a pile of new products. This is the second year running that the invite-only event has been online-only. Historically, Amazon hosts a little meet-and-greet to showcase its new stuff. Last year, we saw a lot of wacky stuff, including the Luna gaming service, Ring's until-today-absent Always Home Cam, and refreshed Fire Sticks and Eero routers. This year, Amazon has more goodies for devout Alexa believers.
The Echo Show 15 is essentially an interactive, networked version of a smart picture frame. It's intended to be hung on the wall where users will be identified with "Visual ID" before using its 15.6" 1080p display to do all the usual things the Echo Show can do. The Show 15 has an all-new user interface optimized for scheduling and communication, which makes sense given that the device is meant for use as a control center for a smart home. Amazon says that'll be out later this year for $249.99. 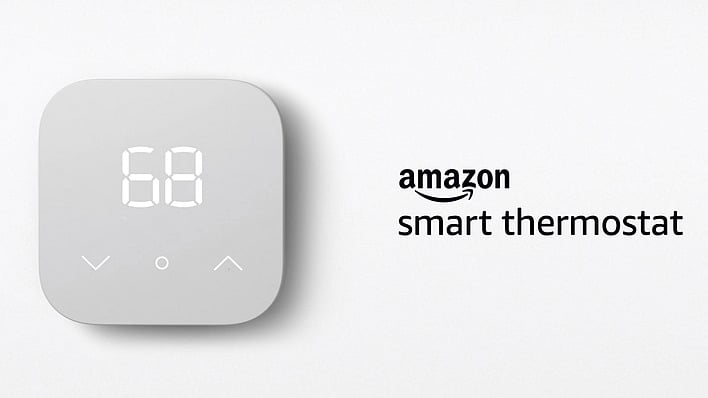 Similarly utilitarian is the Amazon Smart Thermostat. As expected of an Amazon device, the Smart Thermostat integrates with Alexa and allows you to control your thermostat or set heating and cooling schedules through Amazon's services. Amazon worked with Honeywell on the device, and says it should work with the majority of 24V HVAC systems. Amazon also claims that purchasers could be eligible for a rebate with their utility provider. The company didn't say when the Smart Thermostat would be shipping, but it's available now for pre-order at the low, low price of $59.99. 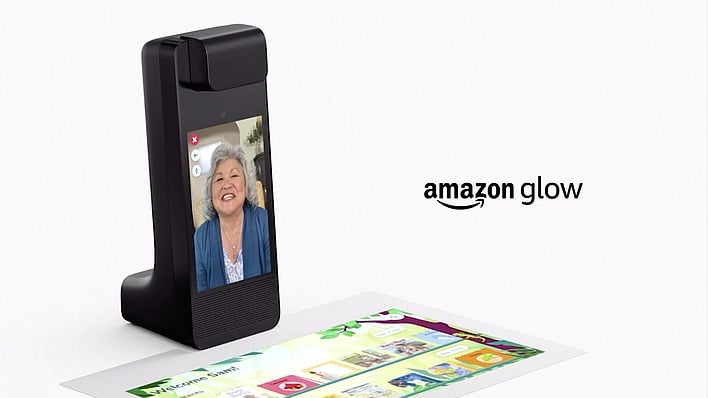 Amazon's next announcement was for the Amazon Glow—not to be confused with the Echo Glow smart light. Amazon Glow is a device right out of classic science fiction: a stand-alone video phone with a projector built-in that can display images over a 19" on the surface where it rests. The interesting part is that the projected image is capable of registering touch input, allowing users to interact with the virtual display. Amazon says it's intended for families to keep in touch remotely, as the projected play area can allow distant parent-child playtime or similar bonding activities. You'll have to sign up for an invite to be allowed to purchase one; the pricing starts at $249.99. 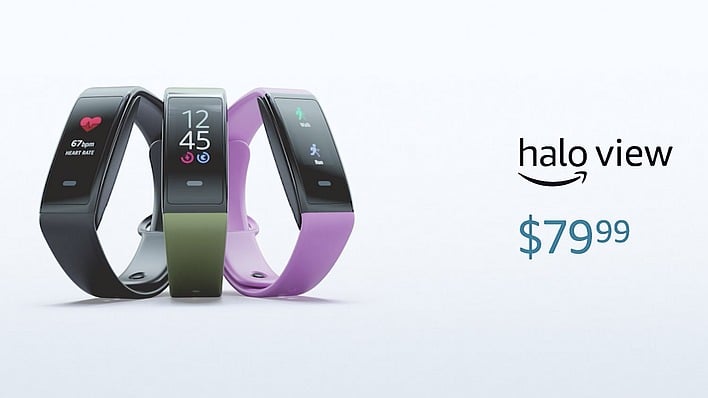 Remember the Amazon Halo fitness band from last year? There's a new version called the Halo View. As you have probably already guessed from the name, it adds a screen—AMOLED in this case—and haptic feedback. Amazon says it includes a heart rate monitor, a skin temperature sensor, and an accelerometer, and also that it's water-resistant enough for you to go swimming with it. A purchase includes a year subscription to the Amazon Halo service, which itself is getting some updates in the form of Halo Fitness later this year, and Halo Nutrition early next year. The Halo View will run you $79.99. 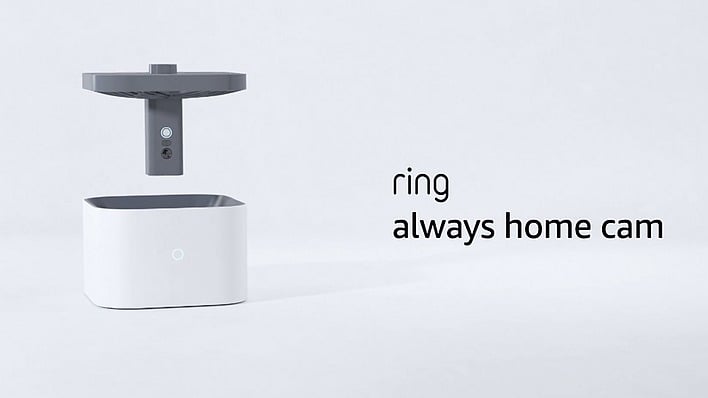 As mentioned in the beginning of this post, the Ring Always Home Cam is finally finding its way to market. For those who missed it until now, the Always Home Cam is a tiny flying drone with a camera and a microphone. You program flight paths for it to patrol the premises while you're gone, and you can view the feed remotely to make sure all is well on the homefront. You can order it through Amazon's Day One program for $249.99. 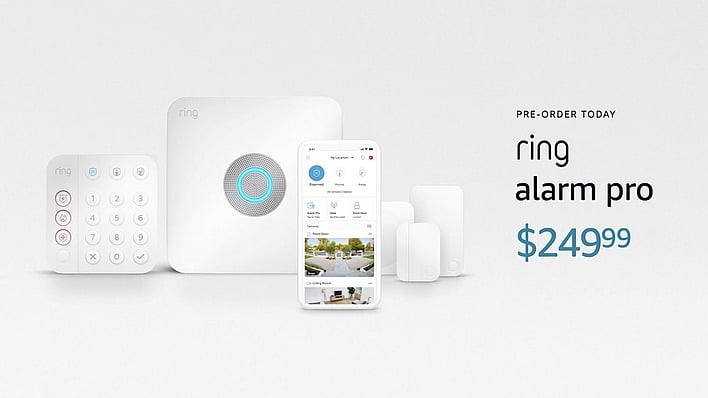 If you prefer a slightly more traditional security device, Amazon is also announcing the Ring Alarm Pro, which is an update to the existing Ring Alarm home security system. Ring Alarm is a series of devices including (but not limited to) doorbell cameras, window sensors, and security cameras that you hook into an Amazon-powered monitoring program to improve your home security. The Alarm Pro integrates an Eero Wi-Fi 6 mesh router, making the home alarm system the center of your home network. The Ring Alarm Pro will run you $249.99, while the requisite Protect Pro subscription package is $20 a month. 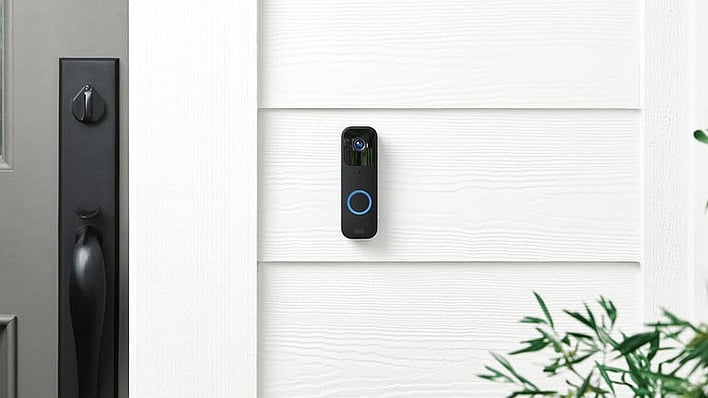 Amazon's other home-automation subsidiary, Blink, announced a video doorbell for $49.99 that supports FHD video, two-way audio, customizable motion detection, and it all runs off a pair of AA batteries. Blink says wired installations can last up to two years on a single set of batteries. Naturally, it can all be linked into your existing Echo-based smart home system, if you have one. 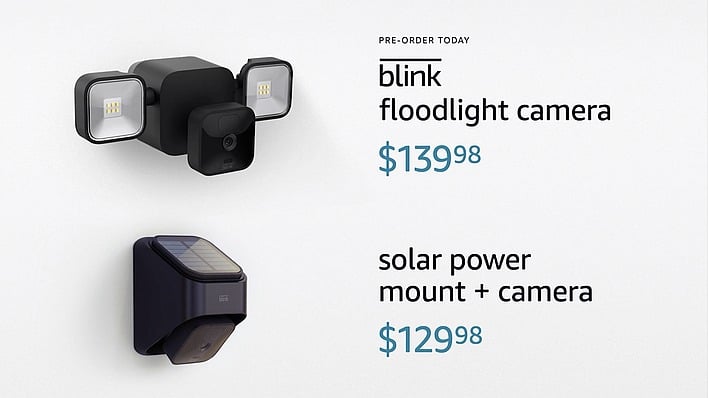 Blink also announced a Floodlight mount and a Solar mount for its Blink Outdoor motion sensors. They do what you'd expect: Floodlight adds a pair of 700-lumen floodlights with motion triggers, while Solar retrofits your Blink Outdoor wireless security camera to be solar-powered. The Floodlight upgrade will run you $40, while the solar kit has to be purchased with a camera for $129.99. 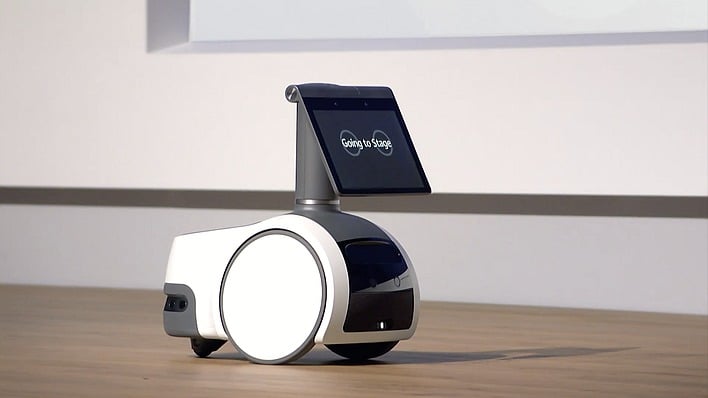 Finally, perhaps Amazon's most curious announcement of the day is the Astro robot. It's a cat-sized robot that basically serves as an Alexa drone for your house. It rolls around and avoids obstacles with a built-in camera, and can extend a periscope camera to check out countertops or other elevated places. You can program it to patrol your house, or send it to check or fetch someone else in the house. Naturally, it includes all the usual Alexa functionality as well. If you want to be an early-adopter for Astro, you can sign up to be offered a chance to purchase it for a cool $1,000.