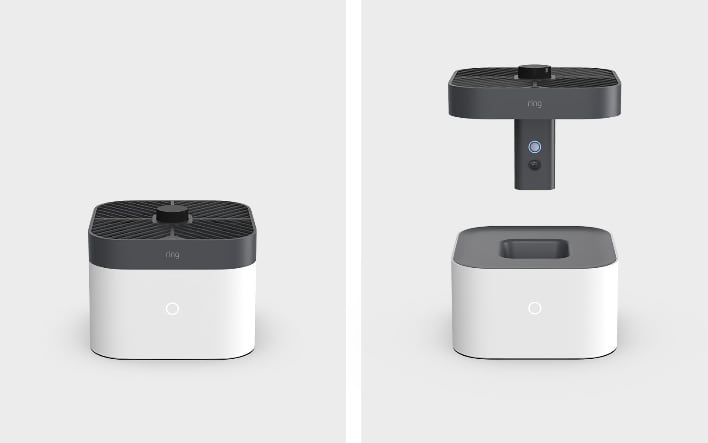 Amazon today announced a slew of new hardware devices within its Ring, Echo, and Fire TV product families. There's a lot to discuss here, so we'll get right to it by starting off with what by far is the most interesting product announced today: the Ring Always Home Cam.

We don't know what to say about this product other than... wow. Should we be stunned in amazement or shake in fear at where security cameras are going? In this case, the Ring Always Home Cam is actually a flying drone that can takeoff from its home base and fly around your home scouting for intruders.

The Always Home Cam integrates with the existing Ring Alarm home security system and can automatically create a flight path once the system detects an intrusion in the home. At that point, the Always Home Cam will fly towards danger to capture 1080p video and audio which is of course streamed to the Ring cloud. We highly suggest that you watch the video embed below to get an idea of how this works.

Amazon is quick to point out that the camera is hidden when the Always Home Cam is docked, and that you can set areas where it is not allowed to fly (no one wants a drone snooping on them when loud noises are coming from their bedroom at night):

It also has obstacle detection along with shrouded fans to ensure that no one loses a finger or an eye when it's moving about your house. Amazon says that the Ring Always Home Cam will ship next year priced at $249.

Although not as exciting as a flying camera drone, Amazon has also announced a ton of Echo speakers, including the 4th generation Echo. This is the biggest redesign of the Echo to-date, as it is now a spherical orb. It now includes an AZ1 Neural Edge speech recognition chip onboard that can process your voice locally without having to first send it off to the cloud. Not only should this appease those concerned about privacy, but it should also result in faster performance.

Amazon is of course boasting about premium "adaptive” sound, support for the new Amazon Sidewalk initiative, and a built-in Zigbee smart home hub (as found in previous Echo speakers). The 4th generation Echo is available for preorder now priced at $99. It will ship on October 22nd, and you can purchase two at the same time to receive an instant $30 discount. It's available in Charcoal, Glacier White and Twilight Blue.

Rounding out the all-new Echo family is the Echo Show 10, which now includes a motorized base. With the help of its 13MP camera, it can track your form and move the display around to keep you in frame. It sounds a bit creepy to us, but then again, so is flying home security drone. Like the new Echo, the Echo Show 10 uses the new AZ1 Neural Edge processor for on-device language processing. The Echo Show 10 can even double as smart security camera, as Amazon describes:

The Echo Show 10 uses advanced computer vision algorithms to help make your home smarter and more secure. When Alexa Guard is in Away Mode, Echo Show 10 can periodically pan the room and will send you a Smart Alert if it detects someone in its field of view. You can also securely access a live feed from another Echo Show device or the Alexa app, with the ability to remotely zoom or pan the display and camera to see the entire room; or set up a Routine that automatically turns on the lights when someone enters the room.

The Echo Show 10 will be priced at $249 when it launches during the Holiday 2020 shopping season.

Finally, we get to new addition to Amazon's Fire TV family. The new Fire TV Stick is 50 percent more powerful than its predecessor while also consuming 50 percent less power thanks to a new 1.7GHz quad-core processor. It is still capable of streaming 1080p content at 60fps with HDR support and Dolby Atmos support. It will come bundled with an Alexa Voice Remote that has dedicated controls for TV power, volume and mute functions. Amazon is pricing the new Fire TV Stick at just $39.99. 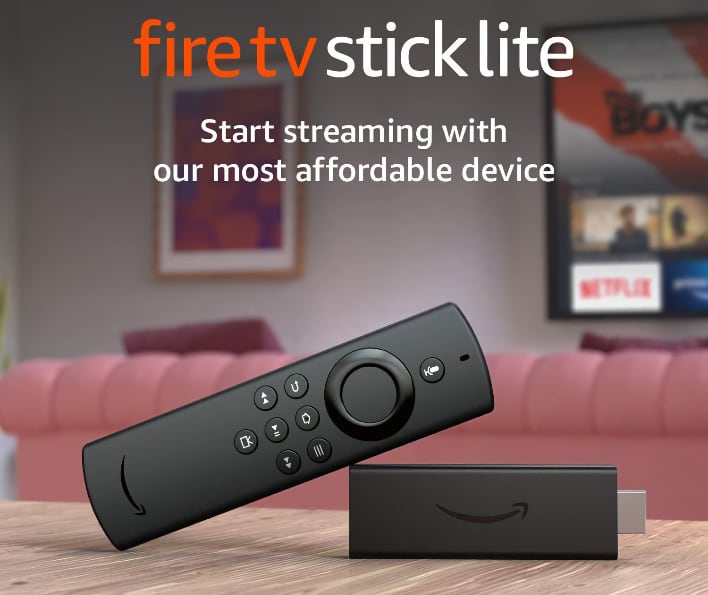 And for those on an even tighter budget, there's the Fire TV Stick Lite, which is priced at just $29.99. It lacks Dolby Atmos support, but still will stream HDR content. It also comes with an Alexa Voice Remote Lite in the box (without dedicated TV controls).