Amazon’s public image has not been all that great lately, with biometric surveillance leaving delivery drivers stressed to the max and long-standing reports swirling of workers needing to urinate in bottles to meet internal performance metrics. It appears that Amazon is trying to fix its image by using community engagement tactics on Twitter, but it may invoked the Streisand effect.


The ecommerce giant -- and second-largest employer in the United States -- really came under fire during the past week after a series of reports pointed out Amazon's seeming reluctance to let workers go to the bathroom without penalty. After Amazon directly denied a report alleging that some workers were forced to urinate in bottles to avoid performance demerits, reports to the contrary flooded in.


Peeing at Amazon - or not being able to - is an actual thing. Here's what workers told me. https://t.co/D0lp4pdQ5D https://t.co/eqFiS8WZbG pic.twitter.com/RVLOYezGvE

Amazon claims its workers don't pee in bottles; defenders say it's an urban legend. But these photos sent to me by a former driver for a former @amazon contractor called Synctruck in a California facility suggest strongly otherwise. https://t.co/hp4zCqOxRO pic.twitter.com/StHNvV9B1x

These reports represent bad timing for Amazon, especially considering a vote to unionize an Alabama warehouse kicked off this week. Since at least 2019, Amazon has utilized “Amazon FC Ambassadors,” which are purportedly fulfillment center employees who are selected to answer tweets about Amazon. When Amazon released the Bezos Twitter army, Aric Toler of Bellingcat compiled some bizarre interactions on Twitter where accounts would randomly change, or tweet threads that would be kicked around to different FC Ambassadors. All in all, it just seemed odd, as if all FC Ambassadors had canned responses or were robots.
This year, it seems Amazon is trying to utilize the full force of the Twitter army to try and repair its image using new accounts created this month. However, it appears that not all of the accounts are real after astute Twitter users caught onto Amazon account using an image of one of the members of “Dude Perfect,” a popular YouTube channel. Another interesting thing noticed is that the real Amazon FC Ambassadors use Sprinklr, a social media management platform, whereas the new accounts are just using “Twitter for Web.”

Amazon didn’t even really try with this one lol pic.twitter.com/Q9dyTzKqns

Since many Twitter users caught wind of whatever was going on at Amazon, two interesting things have begun to occur. Seemingly, many of these new @AmazonFC accounts appear to either have been deleted, scrubbed of odd tweets, or restricted by Twitter for “some unusual activity,” according to the warnings. Furthermore, random Twitter users are taking up these accounts' style to parody them and call attention to complaints against Amazon. 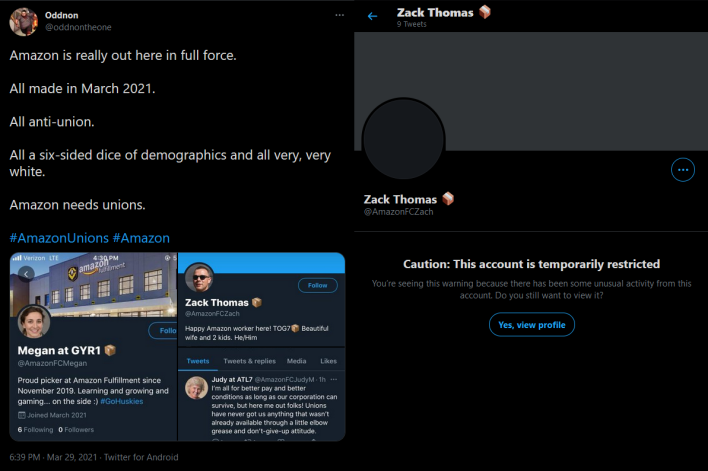 In any case, it is hard to tell what accounts are real and which ones are not when they can be deleted or scrubbed clean in an Orwellian 1984-esque way. While Amazon could be doing this Twitter-trickery directly, a PR company could be rewriting Amazon's Twitter history on a whim, but it is bizarre no matter what. Whoever it is, it will certainly be worth watching in the coming days, so stay tuned to HotHardware for updates.