Amazon's Alexa responded to a 10-year-old girl's request for a challenge with 'A penny for your shocks?'. The revelation shared by the young girl's mother on Twitter has people talking about the possible dangers of a voice assistant without proper curation to the content it pulls from the web.

Alexa is just one of a few voice assistants we mere mortals have access to on a daily basis. Asking Google, Siri, or Alexa questions on our smart devices has become commonplace. But when a child asked Alexa for a new challenge, the response caught the attention of the girl's mother and she was quick to share her experience with others on Twitter.


Kristin Livdahl posted on her Twitter feed that when her daughter asked Alexa on their Amazon Echo device for a challenge, Alexa responded with plugging a charger halfway into a wall outlet and then placing a penny on the exposed prongs. Yes, you read that right.
The mother was shocked to say the least, as were those who responded to the post (and so are we, quite frankly). One person responded by saying, "There is literally no reason to have an 'Alexa' in your house. This should tell you that if it wasn't already obvious." Others felt the need to tell the mother her daughter should be doing other things with her time: "You should hopefully have something nice for your kid to do. Like science projects. Something that won't hurt them...". 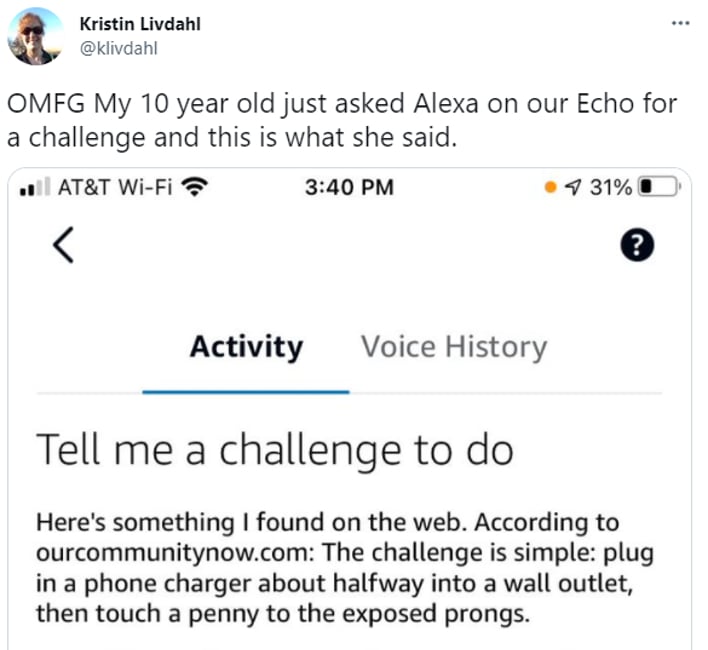 Livdahl stated, "We have been doing some physical challenges from a Phy Ed teacher on YouTube as the weather gets colder and she just wanted another one. I was right there. The Echo was a gift and is mostly used as a timer and to play songs and podcasts."

Amazon Help on Twitter responded to the concerned mom the next day asking for her to follow a link and provide more information so that Amazon could look into the situation. Livdahl shared Amazon's reply, which stated the company was working with its developers regarding the incident and as soon as there was more information they would contact her again. A few hours later there was another post by Amazon Help stating they needed more information to get the issue escalated and asked that Livdahl use the link once again to provide additional details. 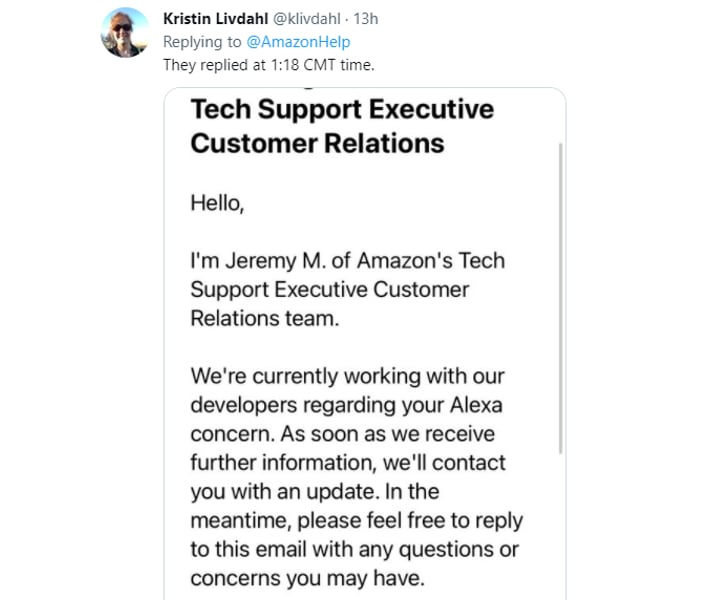 Indy100 spoke with an Amazon spokesperson who stated, "Customer trust is at the center of everything we do and Alexa is designed to provide accurate, relevant, and helpful information to customers. As soon as we became aware of this error, we took swift action to fix it." What actions were taken were not provided, but hopefully this will not be something Alexa recommends for anyone to do in the future.

The actual challenge that was referred to by Alexa came from a 2020 post on ourcommunitynews.com and was part of a report on a dangerous TikTok trend called the "outlet challenge." Participating in the challenge obviously presented a risk of being shocked and starting a fire due to the sparks the penny could create when touching the exposed prongs. Multiple fire departments posted warnings on Twitter in regard to the challenge and warned people not to participate.

Plymouth Fire Chief Edward Bradley stated to the Boston Globe in 2020, "These actions are extremely dangerous and could potentially start a fire and cause thousands of dollars in property damage. It could also cause serious injury to anyone who is nearby."

This should be a reminder that voice assistants are not infallible. Luckily the mother was nearby when the young girl was presented with the challenge and no harm came to her, or anyone else. Parents of young children should always try and be aware of what their children are doing, even with Aunt Alexa. Livdahl added, "It was a good moment to go through internet safety and not trusting things you read without research and verification again. We thought the cesspool of YouTube was what we needed to worry about at this age, with limited internet and social media access, but not the only thing."