As artificial intelligence and machine learning capabilities continue to play increasingly larger roles in everyday tasks, there is a need for ever-faster hardware and architectures. Arm is on the task. During its DevSummit conference this week, Arm's senior director of technology, Ian Bratt, talked a bit about what's in store for the company's next-gen GPU architecture.
His 20-minute keynote was largely focused on AI and ML technologies, including things like the human plasticity curve and other buzz phrases that are not likely to be widely recognized by the general public. They are, however, important for how consumer devices operate and what they are capable of doing.
Think about your smart assistant, be it Siri or Bixby or whatever. We can easily task them with looking up the weather, finding nearby seafood restaurants, checking sports scores, to fire up mapping applications and give us directions to a particular destination, set reminders, compose and send text messages, and the list goes on. All things we may take for granted, but that are built on and made possible by advanced technologies.
Looking ahead, Bratt says Arm is fleshing out a GPU architecture for next year that is much more powerful than its current and past lineups. 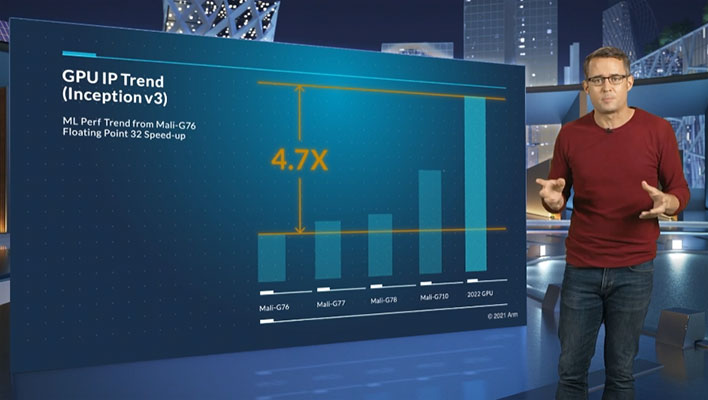 "In our GPUs, we have been pushing the envelope of our GPU performance, so going from [Mali-]G76 to future GPUs, we're looking at a nearly 5X speedup in ML capabilities," Bratt says. "This is starting from G76, which was already a very heavily optimized piece of IP."
Arm launched its Mali-G76 GPU architecture in the second quarter of 2018. alongside its Cortex-A76 CPU architecture. They remained advanced and capable technologies three years later, but have given way to newer architectures, most recently Mali-710 and Cortex-X2.
Introduced earlier this year, Cortex-X2 and Mali-710 are Arm's most recent and advanced architectures, and will likely show up in consumer devices early next year. Mali-G710 is configurable from seven to 16 cores, and purports to deliver a 20 percent boost in overall graphics performance, 35 percent jump in ML performance, and 20 percent reduction in power consumption.
Arm's unnamed next-gen GPU architecture for 2022 looks to deliver an even bigger generational jump in ML performance, according to Arm's slide, shown above. 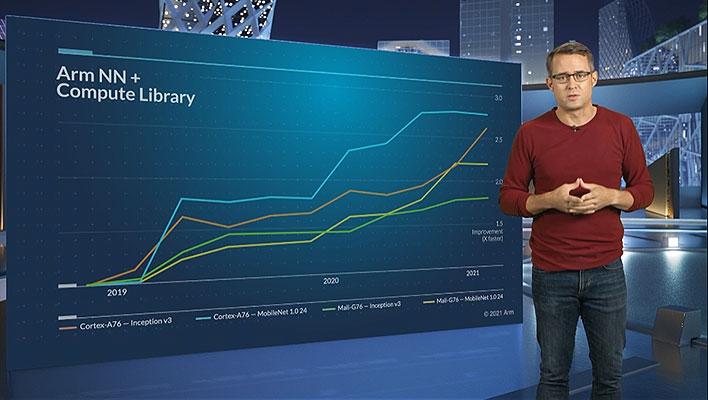 "Of course it's more than just adding instructions and improving hardware IP, we also have to provide the software, the tools, and the libraries to enable that ML performance," Bratt explains.
To that end, Bratt notes Arm has released its open source compute library, which is a source of optimized kernel implementations for CPUs and GPUs, and also released an optimized inference engine that is open-source too. Arm claims it is seeing a 2X speedup from software improvements alone, which is impressive.
What all this means for things like gaming and other graphics intensive tasks, we're left in the dark for the time being. This DevSummit keynote was entirely focused on ML. However, it stands to reason that those areas will see a nice performance bump as well, just to what extent is something we'll have to revisit another day, perhaps in 2023 (since we're still waiting for Mali-710 to manifest in products).