If you're reading Hot Hardware, then we probably don't have to explain that Intel's 12th-generation Core CPUs, codenamed Alder Lake, typically come equipped with a pack of Performance cores and a cluster of Efficient cores. Some lower-end CPUs omit the E-cores leaving you with a four- or six-core CPU that looks a lot like a last-gen part. To date, though, we haven't seen nor heard of an Alder Lake CPU that comes with only E-cores.
Until now, anyway. Over at Japanese-language hardware blog Coelacanth's Dream, they've spotted a bug report from an Intel employee that includes a partial boot log. Included in that log is information that seems to confirm the existence of what that site is calling "Alder Lake-N," a lightweight CPU with only a pair of E-core clusters, totaling eight Gracemont cores. 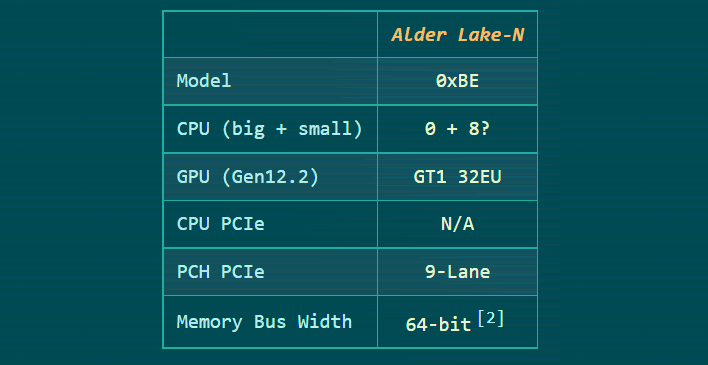 The supposed specs of the upcoming CPU. Chart: Coelacanth's Dream.

According to Intel, Gracemont is about as fast as Skylake at the same clock rate. That chip might be a little long in the tooth now, but it wasn't so long ago that we were running those cores—Intel's well-regarded 10th-generation CPUs use almost exactly the same core architecture. Gracemont is different from Skylake, of course. Besides being a totally separate lineage, Gracemont also shares L2 cache across each cluster of four cores.

This site has actually seen mention of Alder Lake-N in the past; they didn't simply come up with the name on their own. Patches to the open-source firmware platform Coreboot previously indicated the existence of the chip, as well as a total lack of on-die PCIe connectivity and its 64-bit memory bus width.

Coelacanth's Dream goes on to note that the mystery processor includes a 32-EU Xe-LP GPU, just like the extant desktop Alder Lake CPUs. With eight Gracemont cores, a 32-EU IGP, and a single-channel memory controller, this is shaping up to be quite a small chip. The site speculates that this could be the next in Intel's line of ultra-mobile and ultra-low-power processors for netbooks, chromebooks, and similar applications.