Adverswordle Is A Backwards Version Of Wordle And It's Delightfully Challenging

If you are a fan of the addictive Wordle game, then you might also love Adverswordle. Adverswordle is a fun alternative to the Wordle, where you try and stump an AI opponent instead of the other way around. Sounds easy, right? Well, there's more to it than that.

Wordle made headlines at the end of last year, and the addictive game continues to draw people back daily. The game reached such heights, that the New York Times bought the rights to it for a sum in the low seven figures. Its popularity has also led other developers to design similar games in hopes of cashing in on its popularity. Games such as Dordle, Nerdle and others have been popping up regularly. And now you can add one more to the list, Adverswordle.

Adverswordle takes all the pressure off of you in trying to figure out what the five letter word is, and places it on an AI opponent instead. You simply come up with a random five letter word and then load up the game. The AI will then begin its guessing game. If a letter is correct and in the right position, you will click on it until it turns green. If a letter is correct, but in the wrong spot, you will click on it until it turns yellow. As you go about doing this, the AI will continue to make guesses according to your responses, much like you do in Wordle (but in reverse).

There is one difference between Wordle and Adverswordle though, and that is that there is no limit to how many times the AI can guess. So, your goal is not to simply stump your opponent in under five tries, but to see how long you can keep the AI guessing. With unlimited resources for referring to, it is just a matter of time, or guesses, before the AI eventually guesses the correct word. Be warned, if you attempt to make up words or mislead the system, you will instantly lose. So, play fair! 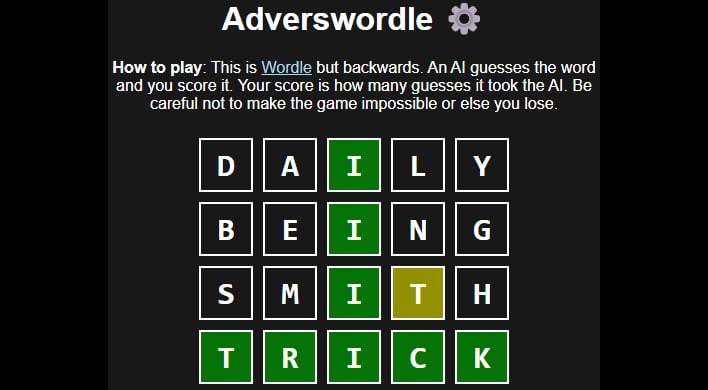 As you can see in the example above, the AI guessed my word "TRICK" in four guesses. I suppose I was not tricky enough to do better. Plus, it's best not to give AI any further reason to daydream about the ruins of humanity, right?

With more and more alternatives to the popular Wordle popping up all the time, it is unlikely that anyone addicted to this type of game play will be bored anytime soon. Let us know down in the comments what your favorite alternative is, and if you happen to play Adverswordle, let us know your best effort at thwarting the AI.