Because of real-life responsibilities and the fatigue they can pile up, some folks just wanna spend their leisure time vegging out instead of mashing buttons, and that's completely understandable. In fact, we'd reckon that there are a whole lot of game consoles out there that spend more time 'playing' streaming services like Netflix and YouTube than they do running games.

If you have an Xbox system from the current or previous generation—that's the Xbox Series S and Series X, or the Xbox One, Xbox One S, and Xbox One X—that plays videos more than it plays games, then you should check out 8Bitdo's new Xbox Media Remotes. They come in "Long" and "Short" varieties, and won't cost you much: $25 for the long version, and just $20 for the short version.


The main difference in the two (besides that the long one is black and the short one is white) is that the long version includes a numeric keypad along with a handy button to toggle closed captioning as well as quick shortcuts to movies and TV shows. 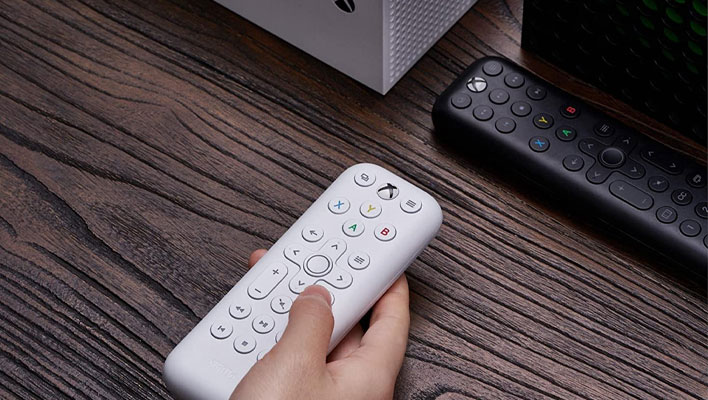 As for why you'd actually want one of these, they provide one-handed control for your Xbox console. You won't be playing any games with one, but they include a number of buttons that the Xbox game controllers don't, like media controls and volume controls. (Make sure you have HDMI-CEC configured on your TV for volume control to work.) There's even channel up and down buttons, if you're still using an OG-model Xbox One for TV.

Microsoft actually used to sell a media remote for the Xbox One consoles, but dropped it after a couple of years, perhaps after intense criticism from the gaming community for what seemed to be a focus on traditional visual media rather than games within the Xbox brand. Likely for the same reasons, the Xbox Series consoles never had a remote at all. These one-handed controllers are officially-licensed, and they use infrared, which means they don't need pairing—make sure you point them at the Xbox, though.