Traditional media, like TV and movies, have speed aside somewhat for video games becoming a popular way for people to spend time. According to new reports, typically traditional media company Netflix is eyeing a foray into the video games market.

Today, The Information reports that Netflix has been looking to hire an executive to oversee an expansion to the video game market. The Los Gatos, California-based company has supposedly reached out to veteran game industry executives about joining the company or perhaps just to learn about the market. However, Netflix has already had some game content come out, like the Stranger Things games or interactive “choose your adventure” type content with Black Mirror: Bandersnatch, so it will not be an entirely new venture. 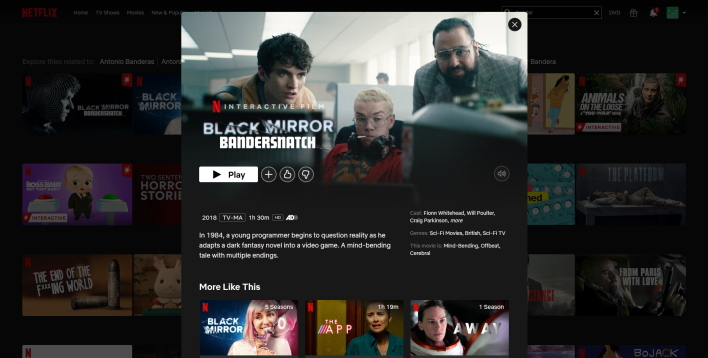 People familiar with the situation have also stated that Netflix’s endeavor into gaming could entail a service like Apple’s online video game subscription service, Apple Arcade. For $4.99 a month, Apple Arcade gives customers access to over 180 mobile games that can be shared with the whole family. This would certainly be an interesting way to get into the market that is saturated by competitors like Google, NVIDIA, and others.

A spokesperson for Netflix also spoke to Polygon and explained that the company is “excited to do more with interactive entertainment,” like Bandersnatch. Perhaps rather than a “games” subscription, it will be more of an “interactive content” subscription instead. You can see the full quote from Netflix below.

Our members value the variety and quality of our content. It’s why we’ve continually expanded our offering — from series to documentaries, film, local language originals and reality TV. Members also enjoy engaging more directly with stories they love — through interactive shows like Bandersnatch and You v. Wild, or games based on Stranger Things, La Casa de Papel and To All the Boys. So we’re excited to do more with interactive entertainment.

Aside from the ideas already out there, we would be interested to see Netflix digitize the game rental market of yesteryear. It may be fun, and somewhat nostalgic, to pay a few dollars a month to gain access to a new game every week with cloud-based saves so you could pick up where you left off later, should you buy the game in full. It would take some of the hassle out of choosing what game to play and exposing people to new genres curated regularly. Whatever Netflix ends up doing, if you have some good ideas for the company’s entrance into video games, let us know in the comments below.