Most people probably have graphics card performance in mind when firing up 3DMark, a popular benchmark for helping to determine how good a system or GPU might be at playing games. The benchmark tests are actually more nuanced than that, and with the latest update, UL Benchmarks has added dedicated CPU benchmarks to the mix.
You can still fire up benchmarks like Geekbench and Cinebench to test your CPU, but now 3DMark will offer up some detailed processor metrics as well. This comes courtesy of a brand new 3DMark CPU Profile section. Rather than produce a single CPU score, as the 3DMark benchmark of old had done, the updated version shows how your CPU scales and changes as applications tap into additional cores and threads.
There are six tests in all. Here's how it breaks down...
In theory, this is actually more robust than Geekbench or Cinebench, both of which test single-threaded and multi-threaded performance, the latter of which taps into all available cores and threads. In contrast, 3DMark now does the same thing, but will also test the performance of two, four, eight, and 16 threads, to give an approximation of performance based on different types of workloads.
Here's an example of what the output will look like, when run with an 11th Gen Intel Core i9-11900K (Rocket Lake) processor... 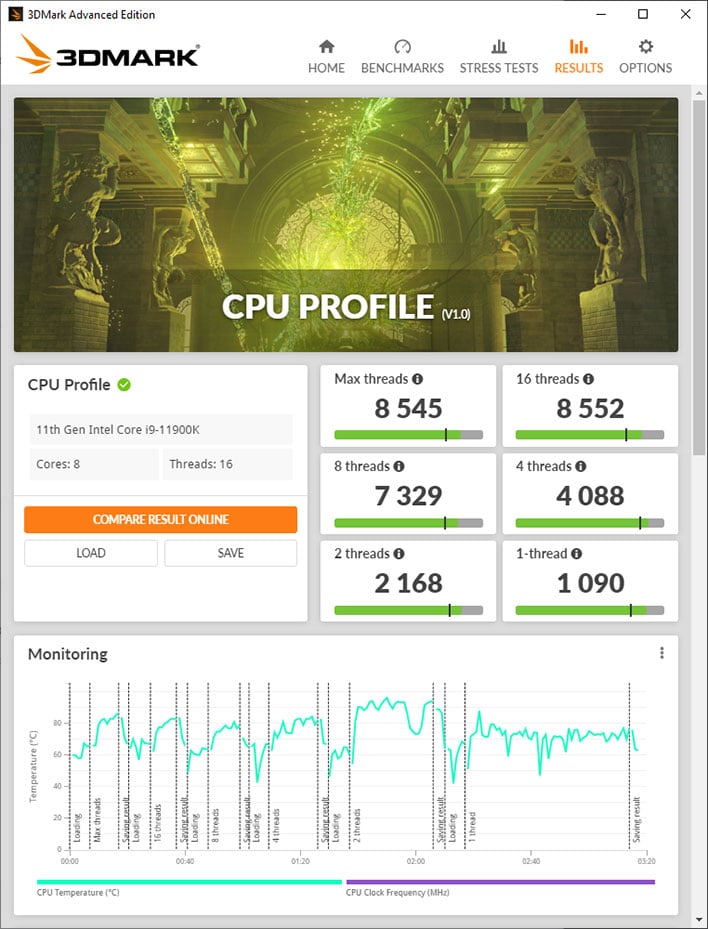 The dedicated CPU tests provide scores for each tier. There is an overall score for each one, and underneath , the green and grey bar provides some additional information. The line that cuts through the bar is the median score for your CPU, so ideally you would like to see the green portion extend to that mark, or even past it. The section to the right of the mark represents overclocking potential for your CPU, based on other results that have been uploaded to 3DMark's database.
What if you score below the median? Well, it could indicate a problem (though not necessarily).

"In most cases, the median represents performance with stock settings. If your score is below the median, it may indicate a problem with cooling or background processes. Check the hardware monitoring chart to see how the CPU temperature changed during the run," UL Benchmarks explains.
The graph will help you visualize how quickly your CPU heats up and throttles. Using that information, you could decide if it makes sense to upgrade your cooling, whether that entails a CPU cooler swap or adding more fans to your case (or both).

This a free update to 3DMark, though it's not clear if it is available in the Basic (free) version or just the Advanced ($29.99 on Steam) version.