Gaming is big business these days, and as a result, any PC OEM worth their salt has a gaming brand. Lenovo is one of the biggest system builders in the world with millions of customers around the globe, so naturally, its gaming brand is Legion. At CES 2022, Lenovo is unveiling the latest revisions to its Legion and Legion Pro laptops, known as the Legion 5 and Legion 5 Pro. 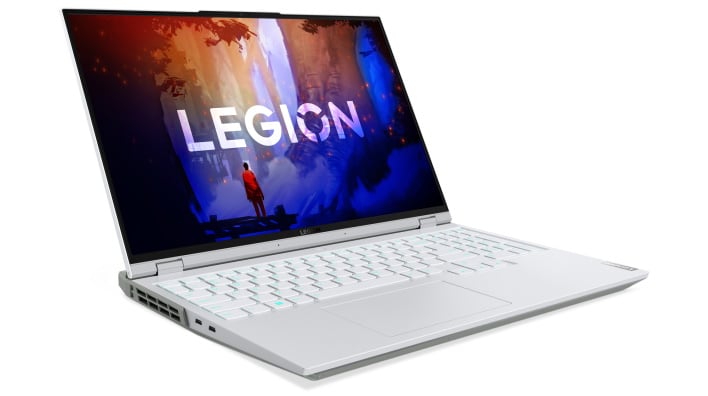 Technically, there's four laptop models we're talking about here: The Legion 5, Legion 5i, Legion 5 Pro, and Legion 5i Pro. However, the real division is between the Legion 5/5i and the 5 Pro/5i Pro. The Pro models are larger and thicker, but come with faster components as a result, while the base models are relatively sleek by comparison. Let's have a gander at each model.

First up are the Legion 5 and Legion 5i. These are both mid-size laptops with 15" 2560×1440 IPS displays that refresh at 165Hz and support NVIDIA G-Sync. Both models come with the "latest GeForce RTX 30 series laptop GPUs." Lenovo doesn't specify what models we're talking about, but the company does say that the top-end GPU for the 5 and 5i comes with 8GB of GDDR6 memory and a Total Graphics Power (TGP) of 125W, with a GPU boost clock of 1485MHz. That means it's an RTX 3070 or RTX 3080; either way, it's a ton of GPU horsepower.

If they're so similar, what's the difference? Well, the Legion 5i comes with Intel Alder Lake CPUs up to the Core i7-12700H (6P+8E), and the "non-i" Legion 5 comes with "next-gen AMD Ryzen processors." We can only take that to mean Zen 3+ based processors from the newly minted Ryzen 6000H series (Rembrandt-H), as both machines come with up to 32GB of DDR5 memory running at 4800MT/s.

As expected of a gaming laptop, the Legion 5/5i come with plenty of ports all around. On the left you get a pair of USB Type-C ports (supporting USB 3.2 Gen 2, DisplayPort 1.4, and on the i model, Thunderbolt 4), while on the right you get a single USB 3.2 Gen 1 Type-A port next to a 3.5mm combo audio jack. On the back of the laptop is where the real bounty of plugs lives: two USB 3.2 Gen 1 Type-A ports, a USB 3.2 Gen 2 Type-C port, an HDMI 2.1 port, an RJ-45 Gigabit Ethernet connection, and the big fat power jack for the hefty power adapter these things take.


If you just can't be satisfied with the specs of the Legion 5/5i, how about the Pro models? The Legion 5 Pro and Legion 5i Pro are big beautiful laptops that pretty much go all-out on performance—at least without resorting to awkwardly stuffing desktop hardware in a laptop chassis. That means that on the Legion 5i Pro you get the option of Intel's Core i9-12900H, and next-gen AMD Ryzen chips on the Legion 5 Pro.

The other two big changes when moving up from the base models to the Pro versions are both in the video chain: the graphics cards, and the displays themselves. The displays on the Legion 5 Pro and Legion 5i Pro are 16" IPS LCDs in 2560×1600 resolution, refreshing at rates up to a blistering 240Hz. "Up to" because the screen supports NVIDIA G-Sync, of course, but these panels are also DisplayHDR 400 certified and able to shine at up to 500 cd/m² peak brightness.

Meanwhile, the extra physical size of the Pro models' 16" chassis gives room to fit the "latest GeForce RTX 30 series laptop GPUs" with a 165W TGP, although the 8GB of GDDR6 and 1,485 MHz boost clock spec remains unchanged from the non-Pro models. Still, even if they're the exact same GPU core, the extra power headroom and cooling space will let the Ampere GPUs clock higher than on the base models.

Despite the small bump in size over the non-Pro models, the Legion 5 Pro and 5i Pro don't change in most other respects. Memory tops out at 32GB of DDR5-4800, and storage comes in the form of a single PCIe 4.0 SSD up to 1TB in capacity. The port arrangement doesn't change, either, although the power adapter on the Pro models is an even bigger 230W, mostly to account for the thirstier GPU.

Naturally, there's a whole lot of other features that are shared by all of the Legion laptops. Bluetooth 5.1 is standard, while 2x2 Wi-Fi 6E (offering peak throughput of 9.6 Gbps) is an available option. The FHD webcams have a physical shutter that closes to protect your privacy, controlled by a button on the right side of the laptops. There's also some interesting software: Lenovo's new Legion Arena app serves as a front-end that consolidates your PC games from various storefronts all in one place, so you don't have to recall which store you bought what games on. 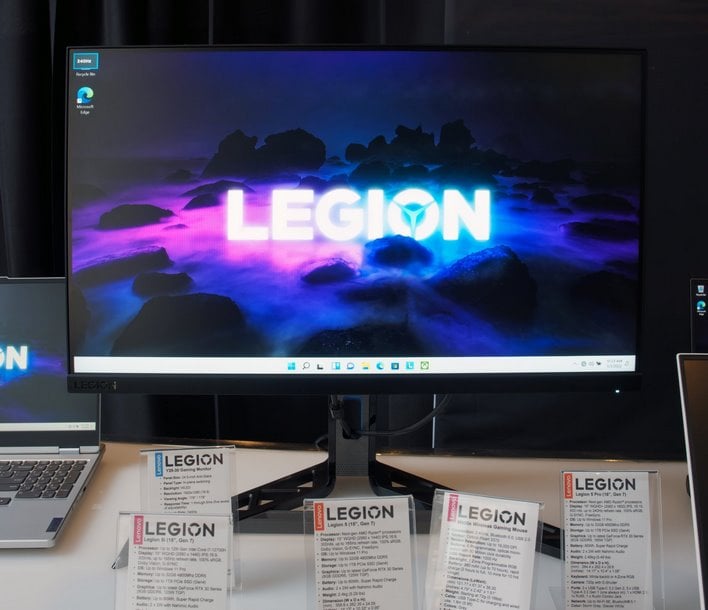 Lenovo is also introducing some new monitors geared towards gamers. The lone Legion model is the Y25-30 (shown above), which is a 24-5-inch IPS display with 1920x1080 resolution, 240Hz refresh rate, 99% coverage of the sRGB color space, DisplayHDR 400 certification, and FreeSync support. The Y25-30 will be available in May for $339.99.