3dfx Claims Its Comeback Is Real With A Portfolio Of Products, Raising More Questions

Will they or won't they? That's the big question surrounding 3dfx, which over that past week burst back onto the scene via a suspect Twitter account. Interest first sparked via a tweet over the weekend, which claimed that 3dfx would make a return this Thursday after a 20-year absence.

Yesterday, Falcon Northwest got in on the action, showing one of its PC gaming rigs with a power brick from a 3dfx Voodoo 5 6000 in the foreground. Today, the "official" 3dfx Interactive Twitter account is whetting our appetites again with a statement on its return.

"Jansen Products is proud to announce that 3dfx is returning after 20 years," the statement reads. "[Jansen Products] acquired the assets of 3dfx Interactive on July 23rd and is currently in the process of trademarking the 3dfx name." 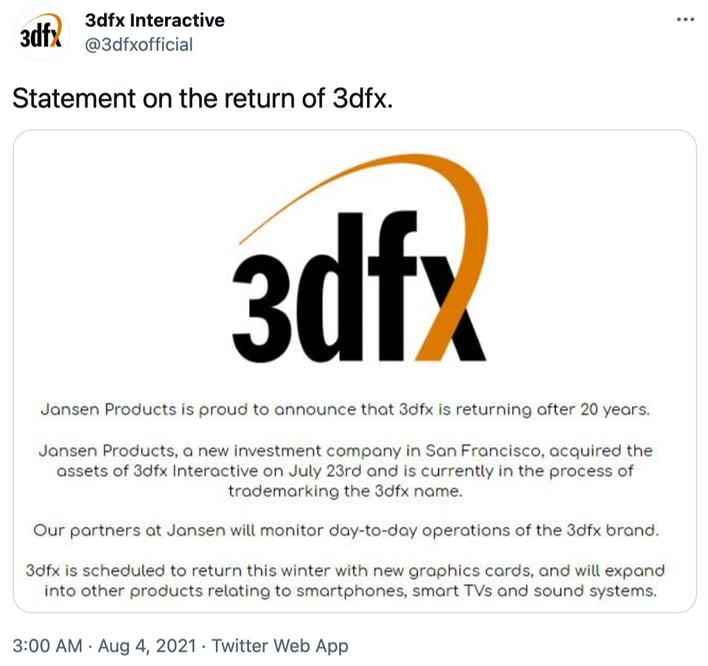 Jansen Products is allegedly an investment firm based out of San Francisco, and it apparently has big plans for the brand. Unfortunately, those plans seem highly ambitious and just as equally implausible in this cutthroat environment. The firm says it will unleash graphics cards, smartphones, smart TVs, and sound systems starting this winter. That seems doubtful, but stranger things have happened.

As we previously reported, this all seems like some ill-timed April Fool's joke or some massive publicity stunt that will fizzle out instead of shoot-off with a big bang. We guess we'll find out what the big deal is tomorrow when the official announcement is supposed to come down from 3dfx, err, Jansen Products.

Until then, us old farts that have been around for at least a few decades can just use this renewed interest in 3dfx to relive the gaming glory days when the company was duking it out with ATI, Matrox, Rendition, and of course, NVIDIA. My very first discrete gaming card was a Canopus Pure3D powered by a Voodoo 1 chip with a "massive" 6MB of video memory (instead of the usual 4MB). In addition, my Pure3D was paired with a Diamond Stealth II S220 (Rendition Verite 2100) 2D/3D graphics card, which was used for some intense Quake II fragging sessions.

It would be great to see a new 3dfx graphics product spring to life to take on the likes of AMD and NVIDIA, but we're not holding our breaths...