Believe it or not, the 3dfx Interactive account on Twitter that has created some buzz over a supposed comeback made its promised announcement today, and we have not been Rick Rolled! However, we might as well have been. The punchline to what we're 99.999 percent sure is a joke (who are we kidding, let's make it 100 percent) fell flat with what looks to be a fake a presentation.
It appears whoever is behind this account wants to keep the gag going, rather than offer up one final tip of the hat to the iconic company that helped pioneer 3D graphics acceleration. My first ever dedicated graphics card was a Voodoo product, and like many old school geeks, I have a fond appreciation of the 3dfx brand. 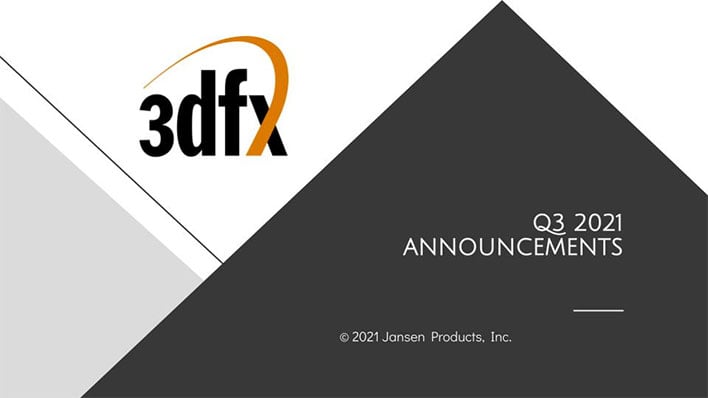 So it was intriguing when the Twitter handle @3dfxofficial popped up out of nowhere, claiming to be back in some form and teasing "many exciting announcements" scheduled for today. And staying in character, the Twitter account posed eight presentation slides this morning to explain why it is returning, what products it plans to release, and other nonsense.
"In mid-July, Jansen Products was able to acquire the assets of 3dfx and is in the process of trademarking the name and some of its new assets, which could take a few weeks to be completed," states one of the slides. "We want to surprise as many people as possible by providing products for the newly-acquired 3dfx brand in smartphones, sound systems, graphics cards, appliances, hardware and much more." 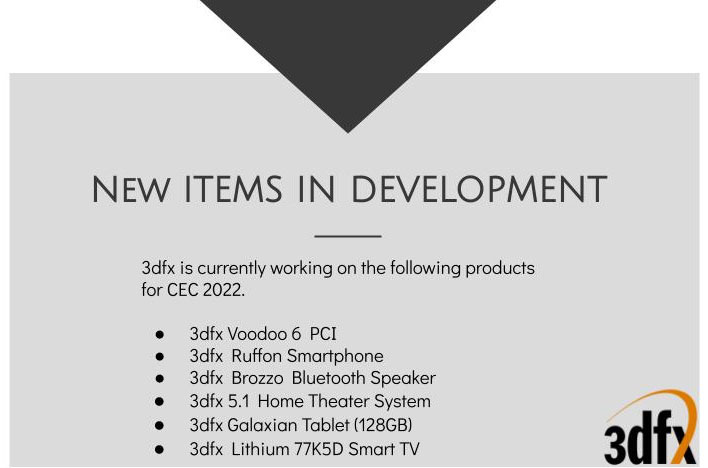 The 3dfx presentation deck lists out half a dozen different products, including a Voodoo 6 PCI (not PCI Express) graphics card and several smart devices, like a 77-inch television. All of these will be revealed at "CEC 2022," not to be mistaken with CES 2022, because there's no way this totally real and not a drawn-out-hoax would have a typo in its hyped announcement. See you folks at CEC.

Another slide breaks down the supposed product focus, as it applies to investments being made—45 percent to smartphones, smart TVs, and appliances; 45 percent to hardware and sound systems; and just 10 percent to video cards. In total, the slide deck says there will be over 600 new products and 300+ new employees. 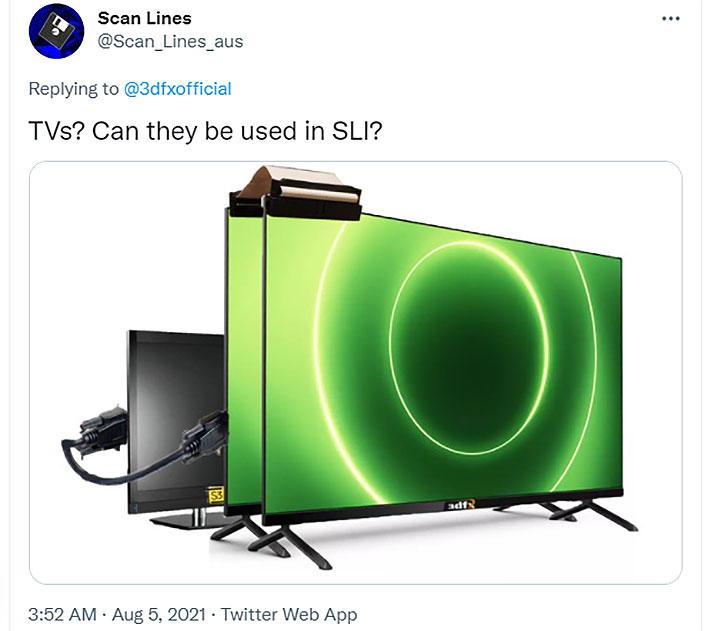 The gag isn't fooling anyone, as the Twitter thread is already getting hammered with a range of responses calling this whole ordeal out. Some are taking it all in stride, however, like the above post asking if the upcoming TV products can be used in SLI. Any other questions can be directed to jansenproducts at articmail dot com, according to the final slide.
Our take? Someone had some harmless fun with this, even if the punchline landed with a thud rather than a comical bang. Falcon Northwest played along in a comical manner too. The entire situation provided an excuse to reminiscence about a bygone era, a time when you could actually buy a graphics card. Those were the days!