We got our first taste of the 2021 Cadillac Escalade in mid-January, when General Motors posted a single drawing of the vehicle's dashboard. Now, however, the veil has fully been lifted from the Escalade and we're getting a comprehensive look at it from bow to stern.

The new Escalade is still a huge, hulking vehicle -- as it has been its whole life. It's based on GM's full-size truck architecture, and has a lot in common with the new 2021 Chevrolet Tahoe/Suburban and GMC Yukon/Yukon XL. But the Escalade gets unique exterior styling that fits in with Cadillac's current design language (it looks a like an enlarged Cadillac XT6). There's a massive grille up front, and thin horizontal headlights that buck the trend of Cadillac's previous vertically-oriented headlight design. Out back, you'll still find the familiar, tall vertical taillights. 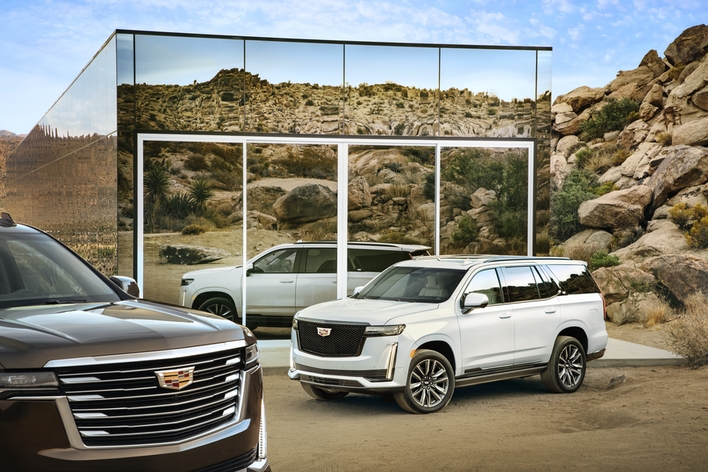 Inside is where you'll find the most drastic changes, as Cadillac has outfitted the Escalade with three curved OLED displays. The brand took a few liberties when it previously said that the Escalade would feature a 38-inch curved OLED panel. Instead, the truth is that it was adding up the diagonal display dimensions of the three displays. There's a 7.2-inch OLED touch panel to the driver's left, a 14.2-inch OLED display behind the steering wheel, and a 16.9-inch infotainment display above the center stack. The inky blacks obtained with OLED technology means that Cadillac didn't have to use a hood to cut down on glare for the displays. However, we have to wonder about screen burn-in for static features on these three displays...

Tech features abound in the new Escalade including an augmented reality navigation system that includes live street views and directional overlays, a rearview camera mirror, 12.6-inch touch screens for the middle-row passengers (which can be used to play games, and mirror content from Android phones), night vision, and an available 36-speaker AKG Studio Reference sound system. 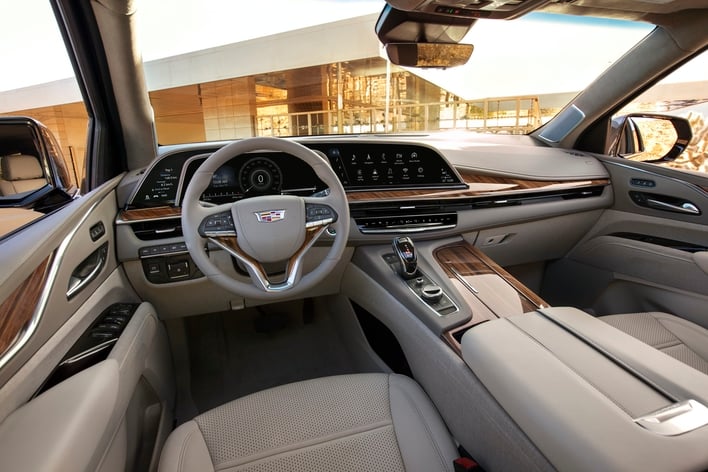 There's also Enhanced Super Cruise, which is Cadillac's self-driving technology. One of the most interesting features of Super Cruise is called Lane Change on Demand. This is how Cadillac describes it:

When Super Cruise is engaged, the driver can either tap or fully latch the turn signal to indicate that they would like to change lanes. This will prompt the system to look for an acceptable opening in the indicated lane, while also taking time to let other cars know that a lane change is imminent. If the system determines that the indicated lane is open, the vehicle will merge into said lane. The driver attention system will continue to require the driver to focus on the surroundings during the lane change.

Super Cruise is currently available on 200,000 miles of highway across the United States and Canada. 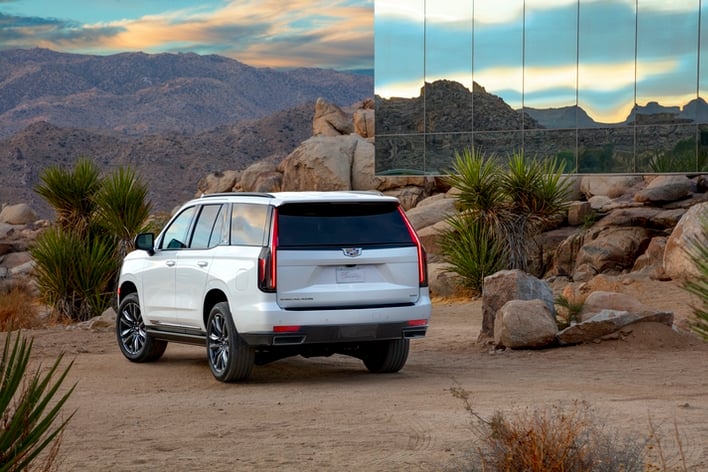 The 2020 Escalade will come standard with a new 6.2-liter small block V8 engine that pumps out 420 horsepower and 460 lb-ft of torque. It will come packed with tech like auto start/stop and cylinder deactivation to help improve efficiency for these land yachts. And for the first time ever, the Escalade will be available with a turbodiesel engine -- a 3.0-liter mill putting out 277 horsepower and 460 lb-ft of torque. Cadillac hasn't revealed fuel economy numbers for either engine, but we'd imagine that the turbodiesel will be the most efficient; both engines will be paired with a 10-speed automatic transmission.

General Motors has not yet announced pricing for the 2021 Cadillac Escalade family, but it will go on sale in late 2020.