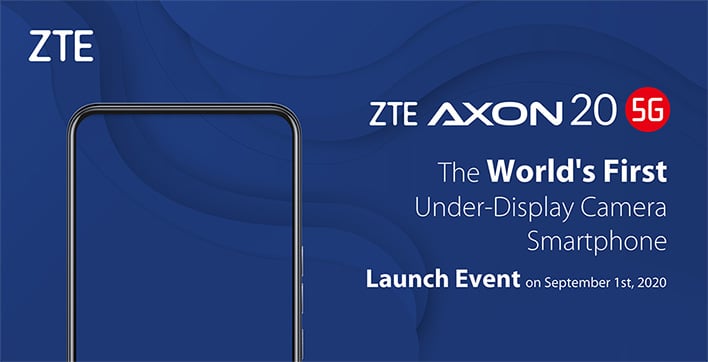 ZTE is planning to launch the very first "mass produced" 5G smartphone to sport an under-display camera for taking selfies. Called the Axon 20 5G, the innovative smartphone will be unveiled during a scheduled press event in a couple of weeks, on September 1, 2020. In doing so, ZTE will add another "first" to its growing list of accomplishments.
"Aiming to continuously provide consumers with unprecedented user experiences, ZTE is committed to accelerating the development of innovative technologies. ZTE has achieved numerous breakthroughs in the field of smartphone displays, including launching the world’s first pressure-sensitive display, the world’s first naked-eye 3D display smartphone, as well as the world’s first foldable dual-screen smartphone," ZTE said.
That latter claim is based on the Axon M, which launched three years ago for $725. Since then, we have seen a few more folding phones emerge, notably the Galaxy Fold and soon-to-be-released Galaxy Z Fold 2 with a larger 120Hz primary display and Qualcomm Snapdragon 865 Plus processor.
As for the Axon 20 5G, by embedding the front-facing camera underneath the screen, ZTE can offer a true all-screen display without any bezels, notches, punch-holes, or motorized pop-up assemblies as found on other phones. With a launch now being right around the corner, ZTE is likely to end up first to market, staying true to its claim.
We will have to wait until then for official confirmation on the Axon 20 5G's other specifications (other than the fact that it is a 5G smartphone). However, the phone is rumored to ship with a 6.92-inch OLED display with a 2460x1080 resolution, powered by a ZTE A2121 octa-core processor clocked at 2.4GHz and up to 12GB of RAM.
The phone is also said to sport 64GB, 128GB, and 256GB storage options, a microSD card slot, and a 4,120 mAh battery. Other leaked specs include a 32MP front-camera and a quad-camera arrangement on the back consisting of a primary 64MP lens, an 8MP shooter, and two 2MP cameras.