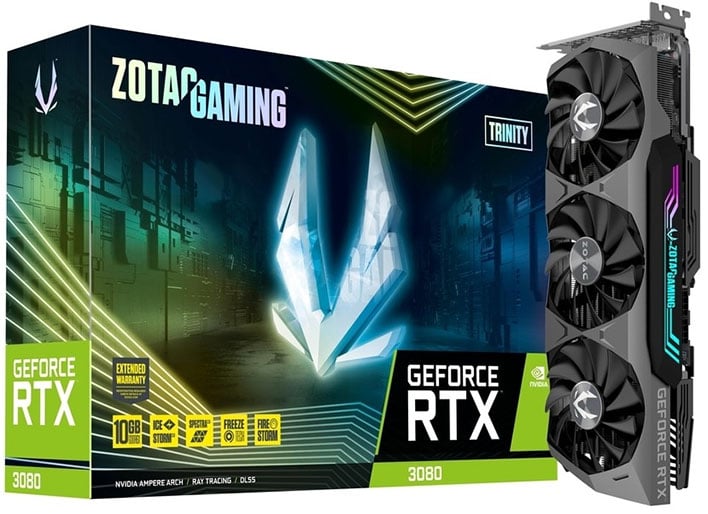 It seems everyone and their uncle was on the hunt for a GeForce RTX 3080 graphics card when it launched to retail last week, and unfortunately, there was just not enough supply to go around. Scalpers looking to make a quick buck made sure of that. Making matters worse, at least one of NVIDIA's add-in board (AIB) partners accepted way more orders than it has inventory to fulfill, and may have to cancel some of them.
That board partner is Zotac, which explained in a now-deleted Twitter post (according to Videocardz) that some unknown error resulted in it accepting close to 20,000 pre-orders for its GeForce RTX 3080 Trinity model.
"Almost 20,000 pre-orders have been received and, with the best of intentions, we cannot serve them in a short time, as much as we wanted. So again: We are infinitely sorry, but we also don't know what went wrong here," Zotac stated.
Apparently the goof-up is tied to pre-order sales that were placed through Amazon in Germany. It is not clear if Amazon dropped the ball, or if Zotac is fully to blame—perhaps it indicated an incorrect number of available models. Hopefully Zotac issues an update, though the reason hardly matters at this point. The end result is, some people may see their pre-orders cancelled, or will have to wait much longer than they originally bargained for.
An interesting side note to this is that some reviews have found the GeForce RTX 3080 Trinity model to be 2-3 percent slower than NVIDIA's Founders Edition SKU. Over on Reddit, a representative for Zotac initially explained that this is "by design" in order to "separate our higher end models from the basic Trinity models." But after the thread blew up, the rep walked back the statement.
"In regards to performance, we aren't sure why the card is performing the way it is based on early feedback. We have been told that the 3080 Trinity is actually beating FE in some tests as well - so we may be seeing a broad range of varying performance or massive inconsistencies," the rep stated.
At present, the GeForce RTX 3080 Trinity is the only 3080 model listed on Zotac's website. It features the same specs as the Founders Edition model, but with a three-fan cooling solution.
In any event, if you're hoping to score a GeForce RTX 3080, hang tight. Eventually things will settle down. That said, we expect a similar scenario to play out when the GeForce RTX 3090 launches to retail this week, and the GeForce RTX 3070 next month.